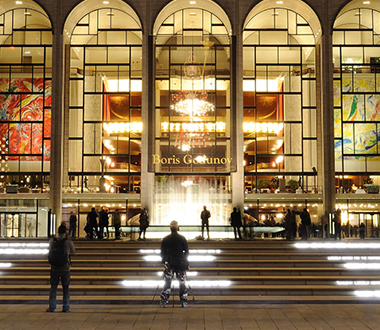 On September 10th, 2013, the youthful World Peace Orchestra gathered to play a concert at Avery Fisher Hall. Introduced by Kevin Spacey, led by conductor Gintaras Rinkevičius, and joined by master violinist Alexander Markov, the orchestra played to advocate peace and to address worldwide issues such as war and poverty. Vocal students from Frank Sinatra School of the Arts joined as part of the choir, after having two months of rehearsal time over the summer with Ms. Best.

According to its website, The World Peace Orchestra’s mission statement expresses a wish to unite the next generation through the power of music. They use their music to spread awareness about many problems that plague the world, such as hunger, lack of education, and inadequate healthcare.

When the choir arrived, there was a two hour practice on site. “The rehearsal process was moderate [and] we had a lot of downtime,” says senior vocal major William Longerbeam. During their free time, FSSA students had an opportunity to mingle amongst the orchestra, which was made up of 134 young adults, aged 10-22, from more than 50 countries. Many of the FSSA performers believed meeting these people to be the best part of their experience.

Not all was hunky-dory though. There were technical difficulties that pushed back the performance, that students said was embarrassing. Also, because of some last minute changes, the choir did not get to perform most of the songs they rehearsed over the summer.

There was also a double-sided issue with Alexander Markov. Markov, a violin virtuoso, made his lengthy appearance that some critics and performers considered show-stealing. Though the World Peace Orchestra was supposed to be the focus of the concert, Markov dominated the stage, taking the spotlight off of the younger performers.

However,  senior vocal student Samantha Clay saw the brighter side of the situation. “We got to experience a true professional at work,” she added.

In summation, senior vocal major Manuela Piedrahita described the experience as stressful, painful, but worth it. The concert certainly started the year off on a high note and the vocalists hope to keep their momentum going.

← Mr. El-Hassan Shares His Love for the Arts
On a Whole New Level →