Phantom of The Opera Opens to a Sold Out Crowd

The Phantom of the Opera opened to a sold-out crowd at FSSA.

The anticipation was building for opening night as family and friends made their final purchases for tickets to Frank Sinatra School of the Arts (FSSA) spring musical Phantom of the Opera.

Within an hour on Friday March, 8, opening night of the show, the atrium was filled with the public, eager to witness the final product of what students and faculty had been working on since the beginning of the school year.

Opening night marked the first sold out opening show in FSSA history. Senior drama major Dominic Green was without a doubt a perfect fit to play the role of the Phantom on opening night, and every song he sang simply gave the audience chills. This was evident especially when he sang “The Music of the Night.” Dominic also reached new heights with Tabitha Setari, a junior drama major, who shocked the crowd as Christine with her wide range in vocals and stunning performance. “Wishing You Were Somehow Here Again” is Christine Daaé’s ode to her deceased father, and when sung by Tabitha became a truly heartfelt performance, which will never be forgotten.

Dominic Green shined as The Phantom of the Opera.

But by far, the actor who truly deserves a standing ovation is freshmen Mateo Lizcano. Auditions for the play were only open to sophomores, juniors and seniors, but never before have we seen a freshmen vocal major step onto the stage in a major production such as this one, and with the role of Raoul, Mateo defied what one thought would be almost impossible. Watching this intense love triangle unfold, seeing the company dance in unison during “Masquerade,” and listening to the overlapping harmonies of instruments with the singers on stage left the crowd in awe.

But entranced in all of the glory, some may have noticed minor mishaps here and there. In the opening scene, there was a long pause before the music box played, we later learned from a crew member, that the piano located in the pit was unable to work, and had to be replaced by a completely separate piano. And then there was Christine’s mic going out during the majority of  “All I Ask of You.” However, because the cast and crew put in well over 500 hours of practice and rehearsals, they know what to do when these things happen; simply push on through. 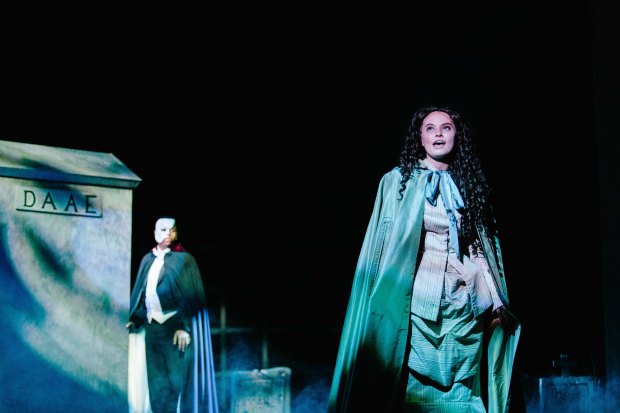 “This was an overwhelming project for all of us. Had we have been ahead of the game, I think there would’ve been a lot more that we could handle. But it was just the timing that screwed us over,” said Natalie Martino, a senior at FSSA and member of the video crew.

Lucia Zadroga, another senior and member of stagecraft agreed with this statement.

“I think that there’s some pressure that gets put onto stagecraft,” said Lucia. “We’ve been with the show the least amount of time and only started working on the technical stuff in late December, so the fact that we had such little time really had its impact the whole production.”

Members of the audience had great things to say about the overall production and process of creating such a show.

“I knew that Phantom is a very difficult show to tackle, but at Sinatra we are so grateful to have such amazing facilities and are capable of creating fantastic shows so I knew that they would do a great job with it,” said Katherine Gannon, a senior at FSSA. “I think that the overall product really showcased the great effort that both the cast and crew poured into it. I was very impressed.”

Despite any troubles that were faced by stagecraft, the crew’s desire to push through it and fix any mishaps along the way should be admired. With such limited time given and being the backbone of the whole production, the crew definitely created a phenomenal product. Being combined with the cast and the director himself, FSSA’s own Mr. Jamie Cacciola-Price, the overall performance will be one to put into the books.

← Can Auditioning Ever Become Bearable?
This is America →