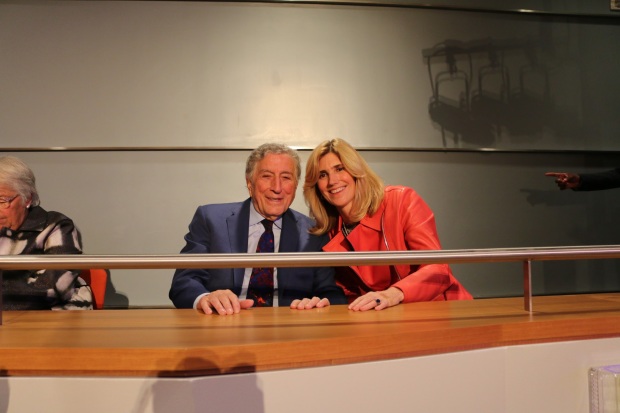 A palpable atmosphere of excitement was felt last night at the Frank Sinatra School of the Arts (FSSA), as Grammy Award-winning vocalist and artist, Tony Bennett, was welcomed with open arms and endless selfies into his 90th Birthday celebration to a sold out crowd in the Astoria, NY high school’s Tony Bennett Concert Hall.

The school gleamed with artistry as audience members stepped into the atrium, accompanied by instrumentalists playing ambient music and large banners of Tony Bennett’s personal artwork cascaded down from the rafters above. The combined murmur of excited students and audience members filled the space while concert goers were taken aback by the beauty of the Tony Bennett Concert Hall. Once seated, FSSA principal, Donna Finn gave a brief introduction to the show and presented Carmen Farina, New York City Schools Chancellor for the NYC Department of Education, who gave a brief speech in thanks of Mr. Bennett’s amicable charity and support to schools and the arts saying that in her opinion there could be no better combination than an artist and a teacher.

Concertgoers were greeted by a string performance at the Tony Bennett Birthday Celebration. Image by Chrysa Karaolis.

Each art studio at Frank Sinatra cultivated and prepared a running tribute to Mr. Bennett’s founding of the school and of his endless legacy and inspiration, as heartwarming tributes and collaborations from the instrumental, vocal, film and dance departments left the audience in awe.

Opening the show was an elegant visual compilation of the great work of Mr. Bennett, including humanitarian awards and recognition from the U.N. and social work with people such as Martin Luther King Jr. If the video wasn’t touching enough, the night continued with a moving performance of “Because of You” from the Opera Workshop Class arranged by Mr. Sandri. The talent continued to shine throughout the night with soulful performances from soloist Erica D’Ancona who assisted the Jazz Ensemble in singing “That Old Black Magic,” “The Best is Yet to Come” and “Fly Me To The Moon.”

Senior vocal majors, Patrick Mahowald and Lloyd Ansah also sang exhilarating solo performances of “The Way You Look Tonight” and “I’ve Got the World on a String.” Additionally duets by Simón Safos assisting Courtney Long and Mica Malubay were also performed. Their pieces were both complex and beautiful. Before the end of the night, the vocal studio closed the show with well-executed vocals. Each note struck a chord in every heart, bringing every person to a standing ovation.

“This was one of the biggest shows we’ve ever produced and it was the only show we’ve every sold out. I was so proud of the performers and stage crew, we really pulled through,” Melanie Spiel, senior Stage Manager, said.

In addition to all the music, the film and media and dance studios presented their collaboration in a tribute music video with “Stepping Out With my Baby.” Professional choreographer Cheri Walsh worked with some of Sinatra’s top dancers to reinvent one of Tony Bennett’s most iconic music videos. Teamed with a production group of Senior Film majors, together the two studios created a wonderfully mastered presentation.

FSSA student performers and Tony Bennett himself got a well-deserved standing ovation from the audience and everyone piled out of the concert hall and into the atrium to gaze upon beautiful masterpieces created by the art majors.

In the end, the celebration was put together with collaboration of all the studios within the school resulting in a spectacular performance in honor of its founder.

“It was amazing performing for the one and only, Tony Bennett. If it wasn’t for him I wouldn’t be able to do what I love every day, and I wouldn’t have met all my amazing and talented peers. So for that I am thankful,” Ana Duran a senior instrumental major said.