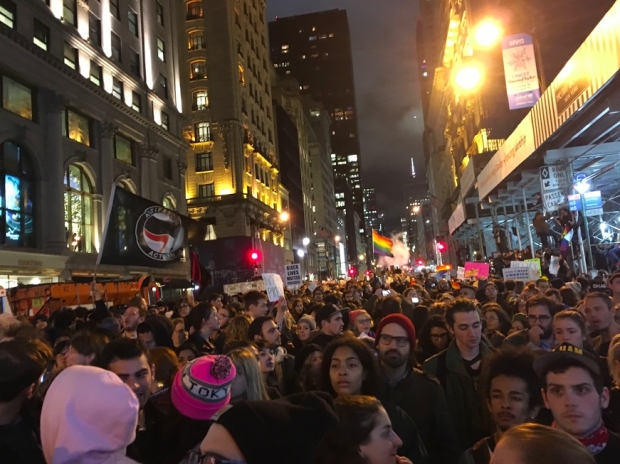 A look at one of the NYC protests, as captured by senior drama student Adriana Georgiou.

Frank Sinatra School of the Arts (FSSA) students know all too well the despair this election caused many people, with students crying in classes and hallways at any mention of the election. Likewise, many unhappy Americans have taken to the streets in protest of this belligerent bully’s presidential win.

Protests all around the country have erupted, most of which have started on November 9th and have only grown since in Portland, Miami, Atlanta and NYC. New York has been a hub for these anti-Trump rallies since Trump Tower, also known as home to Donald Trump himself, is in midtown on 5th Avenue.

The first protest to occur in NYC started in Columbus Circle that afternoon. Crowds flooded into the street after a march started in Union Square that reached Trump Tower where the two protests collided causing 5th Avenue to be practically barricaded by bodies and uncrossable between 53rd to 59th street.

Chants of public distress could be heard from avenues away such as “Love Trump’s hate,” “Not my president,” or “Donald Trump go away. Racist, sexist, anti-gay.” About 10,000 people congregated to voice their anger and the night ended with 65 arrests according to ABC News. In a recent article, ABC News reported that “The majority of the arrests took place in front of Trump Tower, where several people climbed light poles and had to be taken down.”

Protesters were not shaken by said arrests and came back for a second night in front of the tower that Thursday, November 10th, where the future president made an appearance in front of his building. This time police were expecting rowdy crowds so they set up barricades and extra protection.

Many students voiced their anger at the protests over the past weekend and thankfully nobody from the FSSA family was hurt or arrested.

“The protests were not as well organized as they could have been. Granted it was two days after the election. There was definitely a good sense of community and people were looking out for each other. We felt safe,” Hayley Bain, FSSA fine art senior,  recalls.

Demonstrations continued on Friday November, 11th from noon well into the evening. Though there was only one arrest made on Thursday in front of Trump Tower, police say that dozens were arrested on Friday. The tower seemed to resemble an armed fortress by the third day of protests, with NYPD having protected the building with barricades before protestors arrived. About 4,000 people came to Washington Square Park and later many joined the protestors at the tower. Eleven people were arrested on disorderly conduct charges according to AM New York. Over the weekend the city was filled with protesters voicing their anger and fear over the next president. No arrests were made Saturday or Sunday despite the demonstrators flooding in over the weekend.

The protests seem to be slowing down with no social media event pages reporting any other rallies, but nothing is certain. Many say that demonstrations are not expected to slow down until something is done about the anger from the election. Many are calling for the impeachment of Trump, however that will not improve the current American political situation given that vice president-elect Mike Pence would take his place, who represents more radical ideas than Trump.

Though Trump and his policies put many people at risk of deportment and further discrimination, he is simply a figurehead for the massive middle American population that feels disenfranchised to the point of turning to fascistic and racist ideals. He himself does not know how to enact laws that put minorities in harm’s way and therefore relies on conservative political advisers that would make these decisions for him. Mike Pence on the other hand is not blindly led by advisers, but is better politically educated than Trump who actually knows how to enact laws that will negatively affect massive groups of minorities all across the country. Hopefully the tumultuous voices of angry citizens are heard and the federal government acknowledges the public distress caused by this controversial election.

← What Really Grinds My Gears…
Instrumental Dept. Gets by on D.I.Y. →