Mixed Race in a Mixed Place 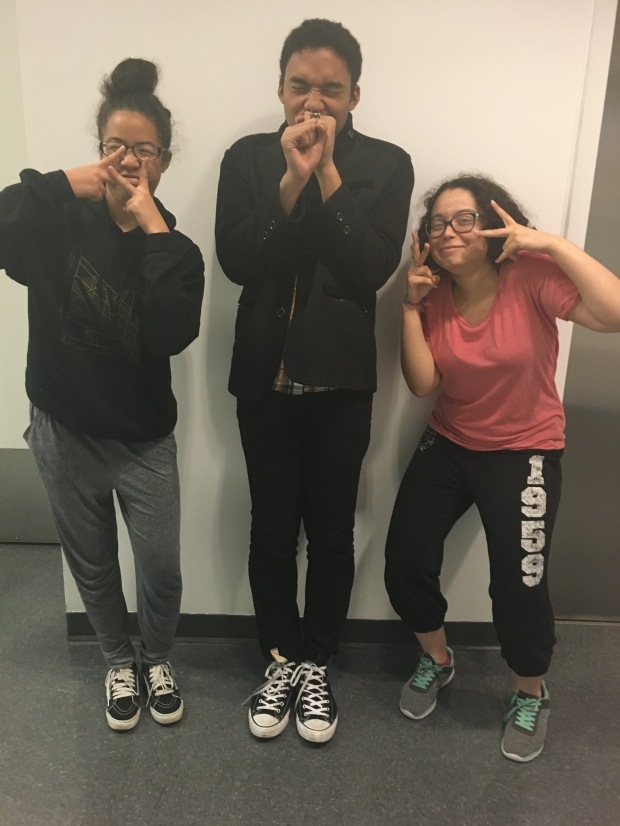 The writer Lisa Moore with Isaac Pettigrew and Cheynne Haskins.

“Yo, so are you more Black or more Asian?”

I am very used to these questions and reactions. As a half Japanese, half African-American biracial girl, I understand the reasons why people may ask me such things.

Ambiguity can raise many questions, some out of interest, pure curiosity, maybe a little bit of ignorance. It doesn’t bother me too much, I get it. However, the real question we should be asking ourselves as a human species is, does it really matter what anyone’s background is?

The state of the world is very focused on the construct of race. Where you are from and how you look are the basic building blocks to how people treat you.

Whether you are White, Black, Asian, Hispanic, whatever, there are stereotypes that come into play. Society enforces those stereotypes so that when people of different races meet, first impressions come from those preconceived notions of what their race is subject to. The color of their skin, their eyes, nose, lips, hair all connect back to a stereotype that will define them before you get to know who they are.

Stereotypes are the precursor to a personality, but when a racially ambiguous person comes along, how do those culturally ingrained labels work?

This is a question I have thought about a lot, because, in a society where race is so prominent and impactful, where could I possibly fit in when I am somewhat of an anomaly?

The stereotypes that come with being Black and Asian do not exist because they haven’t been created. The conclusion that I have come to is that race is something that doesn’t exist. Physical and cultural differences do, but the idea that people can be pigeonholed and defined into strict groups simply doesn’t make any logical sense.

Being biracial and living in New York City, I’ve felt accepted, but also faced with many questions that have made my views on race confusing. On tests I’m asked to choose what singular race I am, and there is never the choice of  “mixed” or the option to choose more than one. Before this, I never felt like I had to choose one side or the other, but in other mixed kid’s experiences, they have had to conform to society’s concept of race.

Cheyenne Haskins, an 18-year-old senior art major at Frank Sinatra School of the Arts is biracial: half white and half black. Unlike my experience, she feels that she has to conform to one race or the other in certain situations.

“Maybe some people don’t feel this way, but I feel like I have to choose sometimes. Like, its always felt like two separate things,” Cheyenne explains.

In the sense of connecting with one side or the other, the split is pretty prominent when looking at how the media represents both black and white families.

“I identify with different aspects within my own life, but it’s not really one cohesive representation. I can feel a connection with both white families and black families,” she adds.

In Cheyenne’s case, race is something that she comes in contact with in many situations, and the established stereotypes that exist in our society play a role in her life as well.

Isaac Pettigrew, a half-Jamaican and Japanese senior dance major explains that being American, is a big part of how he identifies as being biracial.

“I wasn’t raised in any of my parents common ground, I was raised in America and I’ve grown up basically not connected to any of them, but I think my racial background has affected me because of the fact that I was born within a diverse existence and that has led me to grow up open-minded. It has led me to grow up around different people,” Issac said.

Isaac’s experience has mostly revolved around the differences between his parents, and not necessarily the people around him.

He believes that society is coming to a point of acceptance for other races first in the media, and we will eventually reach that point.

In terms of struggling with misconceptions from other people, Isaac doesn’t really see it in a negative light. “As far as assumptions go, nobody ever really makes assumptions and if they do, they’re never negative. They normally assume being multiracial, you must be pretty interesting,” Issac said.

The experiences of these biracial students suggest that race has power in how people perceive you. Negative or not, people look at you as different, and for some that is something positive.

In my experience, I feel that when people ask, they almost want a basis for judgement, and when I can’t give them something concrete like the labels of “black” or “Asian” they get confused.

That is where we hold power. To break those stereotypes and open people’s minds to the point that race really should not play a role in how someone is treated. As someone from a multicultural background, I take pride in my ambiguity, and I’d like to think that I can make a difference in just being me. The status that me and other multiracial people hold may be confusing, almost to the point of anger for some, but it is important to make it known that we exist, and bring it to the forefront in a conversation about race.

← VICE’s Gaycation Goes Behind the Scenes
That Slang Thang →