What’s in a Decade? 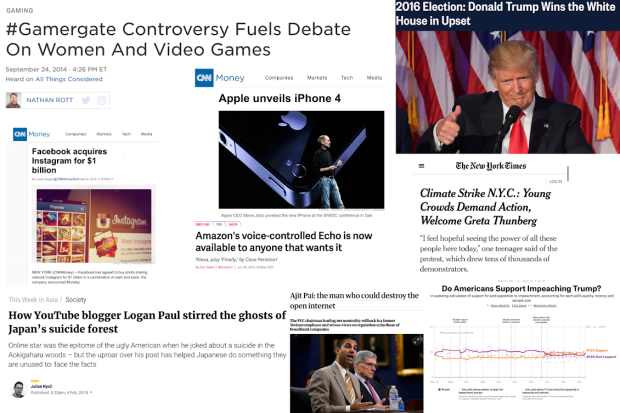 In this Boomer-proclaimed “Internet Age,” we have seen a variety of trends come and go. But, then again, isn’t that what made the 2010’s unique?

From internet hits such as Gangnam Style and Grumpy Cat to fashion trends including cropped tops and mom jeans, this decade has been filled to the brim with controversy and mindless-fun.

This decade has witnessed a heightened awareness in issues affecting millions, if not billions of people, spanning from sexual harassment to race and gender-based controversies. For the first time in Hollywood, victims of prejudice and assault had their voice truly listened to (although we still have a ways to go in 2020).

In 2016, America saw its first TV businessman take office, which defined the 2010’s in and of itself and changed the way the presidency was truly orchestrated. “Fake news” became a  headliner, and this era of misinformation was only amplified as the decade progressed.

For many New Yorkers the 2010s appeared to be the height of post-modernist culture. Trends seemed to lose originality, and we saw the revival of multiple fashion staples that originally saw their glory days in the ’80s. Even activist movements seemed to resurface, such as climate change rallies and protests that originally made headlines back in the ’90s. In this post-9/11 world, everything is so much safer and more regulated, but it seems like paranoia is only increasing. The rise of technology brings with it issues that people just don’t know how to  comprehend yet.

“Personal information is so easy to access online now. I go to crazy lengths to make  sure I’m using trustworthy sites that can’t hack into my photos and contacts and such,” says Mateo Lizcano, a sophomore vocal major at Frank Sinatra School of the Arts.

He says that younger kids who never knew life without an iPad just don’t understand the risk.

“Their tablets are replacing diaries and physical games, too. My cousin asked me to play Crazy 8’s with him, but that meant having to download an app instead of just using a deck of cards. I think that sometimes I’m addicted to my phone, and I don’t wanna sound like a boomer, but it’s nothing compared to kids who were born in the late 2000s and 2010s. They just can’t live without technology; they’ve become so annoying, unaware and ignorant. It’s concerning,” he added.

Remember a time when all we had in our home was a landline and a big box TV?  Now, the standard for lower-income families stretches far beyond what even middle-class families were able to afford fifteen years ago. The price of keeping up with the times does not  seem to be dwindling.

Along with the increased use of technology came bizarre trends and memes that constantly changed with the wind. The term “influencer” was coined to describe Youtube stars and Instagram pages with millions of followers.

“Hate it or love it, internet humor has really come a long way. It used to be that you’d see a well-crafted picture with a unique set-up and funny punchline, but now all that’s popular is a bunch of different versions of a toaster just sitting on a counter with a stupid caption like ‘Let’s get this bread’ and everyone finds it hilarious,” Celina Randazzo, a senior vocal major at Frank Sinatra School of the Arts said.

“These posts are being pumped out so fast it’s hard to keep up. I feel like my attention span has gotten the short end of the stick these past few years,” she added.

Along with a shortened interest in hand-crafted memes, this decade has been associated with “snowflakes” and groups of people getting everything they want.

This decade has also seen a major shift in vocabulary and what people deem appropriate. Kids are exposed to graphic material at a really young age because many parents don’t monitor their internet activity. It’s so easy to just mindlessly sit your kid in front of an iPad and get back to work than it is to talk to them. Children watch inappropriate content all the time and use curse words and certain profane gestures with their family and friends constantly.

“Cursing is so apparent with this younger generation. I curse constantly and no one says anything about it. Hell, even my teachers curse and play stuff that uses bad language,” Ana Popovic, a junior vocal major at Frank Sinatra School of the Arts said.

“I even say slang that adults can barely comprehend like ‘oof’ and ‘periodt’ in my everyday life. When I say ‘that’s the wave’ to agree to something no one even bats an eye, it’s crazy. My parents just don’t enforce rules anymore or language barriers. This is just the decade of no one caring what others do,” she added.

This decade has been defined by many different things, including fleeting trends, internet oddities, and political firsts. Not only have people changed in the 2010s, but the rapid pace in which trends have shifted is monumental, and is defining in itself.

Mateo put it best when he said: “The best thing about this decade is that it’s over!”

← Major Medley for FSSA’s Holiday Concert
What’s in a Decade: Politics and Beyond →