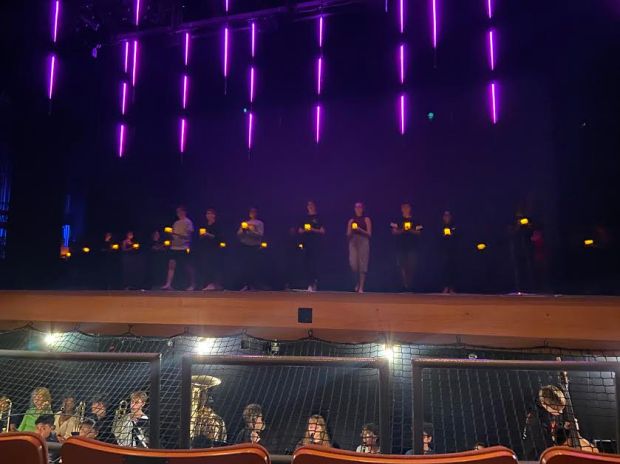 The dancers and the instrumental majors rehearse for the holiday concert.

As the holiday times approach, the festive feeling is emerging within Frank Sinatra School of the Arts (FSSA). Students are getting into the holiday spirit with the film, dance, vocal, drama, and instrumental majors all working tirelessly on FSSA’s annual Holiday Concert taking place this Friday (12/13) and Saturday (12/14).

The concert consists of various performances by different studios such as the vocal students performing medleys of everyone’s favorite Christmas songs; instrumental majors performing various scores that ring in the holiday spirit; and the dance majors performing different pieces that remind us of the joy of this season. The concert also features three holiday films, staring drama majors, that tie into each other and all culminate into the theme of the sophomore dancers lively heels dance.

One of the most magical aspects of the holiday concert is the opportunity for students to collaborate with different majors to create a work of art that is typically never seen before. This type of opportunity is rarely seen in other works performed in the Tony Bennett Concert Hall.

This year’s holiday concert features a grand display of what the school and majors have to offer. Andre Vazquez, the stage director for Tony Bennett Concert Hall, has worked nonstop in collaboration with the dance, vocal, and instrumental teachers in order to orchestrate one piece that will utilize the talents of each major to create a single picture.

“Every studio has their own show and the holiday show is really the only concert we have all year that is a combination of all the studios coming together. The audience gets to see a snapshot of what the school really has to offer,” Andre said.

The junior and senior dance majors are performing choreography set to the live songs and music performed by the vocal and instrumental majors respectively. Having the vocal majors perform on stage and the instrumental majors playing the music in the pit, all while the dancers bring the scores to life with their movement, all transcends into one piece of art that is rarely seen on the FSSA stage.

While the end result of creating a piece that includes multiple majors is a work of art that can’t be paralleled by any other FSSA production, the process to reach this masterpiece includes many hardships that are not viewed by the public.

Cheri Walsh, choreographer of the senior dance majors piece, and executive director of Exploring the Arts (ETA), Tony Bennett’s foundation, says that it’s tricky syncing the choreography with the orchestra.

“The dancers rehearsed it quicker than they are playing it, so we have to find that balance,” she said.

Cheri goes on to explain how creating/teaching choreography separate from the live vocalists and instrumentalists adds an extra challenge to both her and the performers. She explained that live music isn’t always at the same tempo so the parties involved in the piece must work extremely hard to make everyone’s timing as perfect as it can be.

Not only are the teachers/choreographers feeling the pressure from ensuring that this piece is one to remember, but the performers themselves also feel the effects of such a challenging collaboration process.

Veronica Saint Fort, a senior instrumental major who is performing in the orchestra for the joint ensemble, shared her views on the entire process of fine tuning the piece.

All the students performing in the piece have a significant role, regardless how big or small. Each person is responsible for not only representing their own major, but the entire school. They have the opportunity to showcase their talents to an audience full of patrons of the arts and let all of their hard work pay off.

While most FSSA students are giving their all on the stage during the show, the art majors are showcasing their talents in the student run art exhibition located in the 1st floor black box theater. 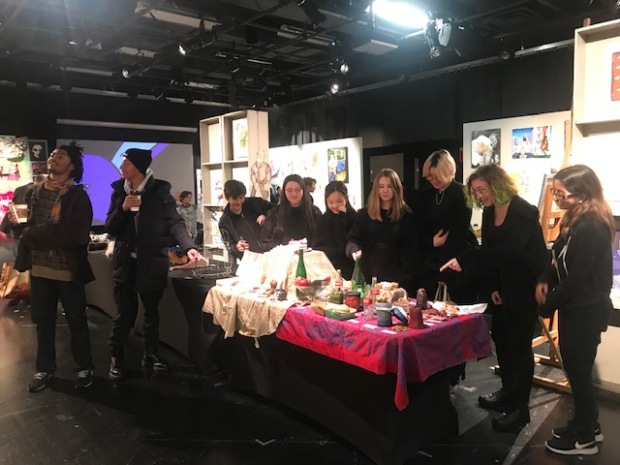 This exhibit adds even more dynamics to the holiday concert, giving everyone who steps foot into the school a peek inside the art department at Frank Sinatra School of the Arts. Despite the art majors inability to perform on an actual stage, the students showcasing their talent in the exhibition adds to the magic created by having all the majors represented in one cohesive show.

Jayden Ashley, a senior art major whose work is on display in the art exhibition, shared his feelings on having his majors work represented despite not being part of the actual show.

“We’ve always had the blackbox for the holiday show and it’s nice to be able to have people stop by to see our work that everyone tried really hard on,” he said. “The inclusion of a gallery as an addition to the winter concert gives art majors their much needed representation and allows them to be part of the entire experience.” 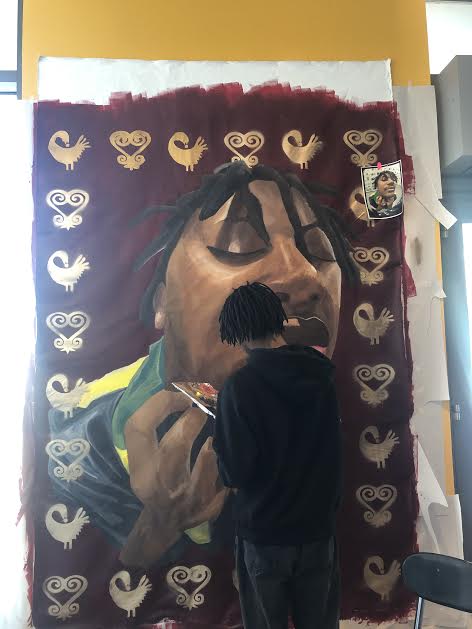 Senior Jayden Ashley working on his piece for the art exhibition.

The holidays at FSSA means bringing the talent filled community closer than it’s ever been. The annual holiday concert features the works of multiple majors showcasing their talent to spread the festive feeling to the rest of the FSSA community and the public. The performers in the holiday concert, in addition with the art majors exhibition, are able to utilize their talents in a collaborative way that successfully spreads the holiday spirit and brings joy to both the audience and performers alike.

← The New Era of Media Consumption
What’s in a Decade? →