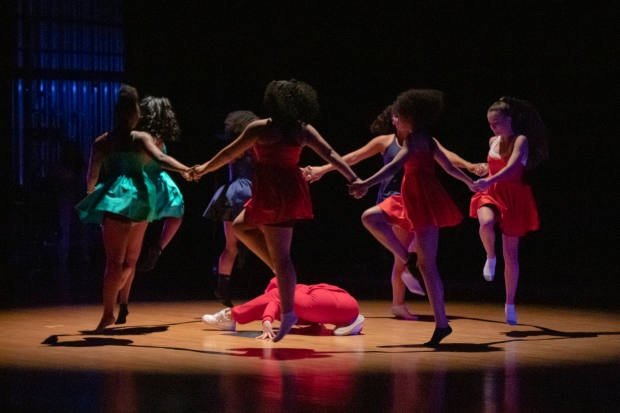 The FSSA dance studio during the Halloween show.

Halloween has become a huge staple in the lives of high schoolers. Each year students eagerly wait for October to get their spook on. Whether it be for the costumes, the parties, the memes or even the candy. Some schools even allow students to come in dressed up during their school day.

Tradition 1: Each year the school staff decorates the atrium with spooky decorations to get students into the spirit of Halloween. From cobwebs and dead bodies to tombstones and spider-galore, the realistic decorations capture the attention of anyone passing by. However, the grandest of them all is the school’s eight-foot-tall, two-headed, fire-breathing dragon. Students gather around the grand beast for selfies, tik-toks and just to enjoy its presence altogether.

Tradition 2: Students are encouraged by the school to dress up every year and participate in the annual Halloween show. Students arrived to school with costumes that showed off Frank Sinatra’s creative spirits. This year there were sightings from Chucky, Babies, the Joker, and even A$AP Rocky. Some students even went all out with using special effects make-up to bring their costume to a whole other level of scary with blood dripping and jaw-dropping, gruesome effects. Even teachers got in the Halloween spirit by dressing up as well. 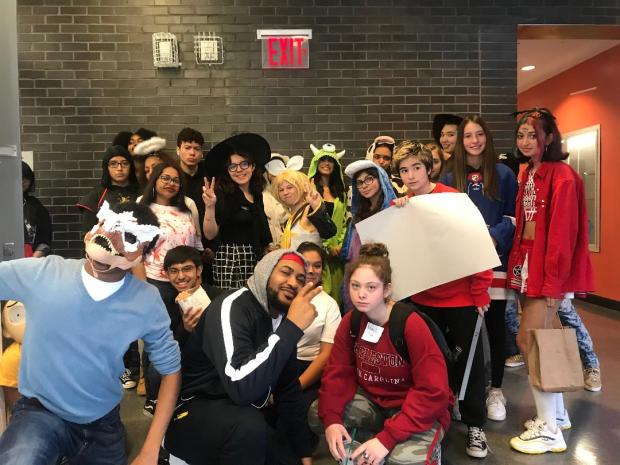 Tradition 3: The Senior Drama Department collaborates on a costume theme every year.

“We’ve had so many debates on what we should be,” said senior, drama major, Dymond Veve. “This year we’re gonna have a lot of fun with it.. It’s gonna be a lot of fun going around and scaring people.”

Ultimately the class decided that their theme was to be Zombie Disney. The seniors brought their undead Disney favorites to life, with their own creative twists on classic characters such as Ariel, Elsa, Hercules and even The Hunchback of Notre Dame.

Tradition 4: The Senior Film Department also has its own tradition to live up to. Students spend the summer writing original horror film scripts. Once classes begin in September, they get right to work on the production.

Senior, Film Major, Elias Raff worked on the intros and outros of each film.

“From day two of this year we were working on these films. And a lot of work went into each aspect of the completed product.. It was almost surreal seeing the final product on the big screen. In past years, looking at other people’s films was cool, but I felt so proud seeing my own,” Elias said.

The group managed to produce three horror films all connecting to high school tropes. One even being featured in a local horror film fest. These films played on tropes and fears including cult-like cliques, technology and running into your teacher after school.

Tradition 5: Last, but not least of the traditions, the Sinatra Step Team had the whole school riled up with its spine chilling introduction based on the famous horror film, “The Purge.” All members had purge masks that illuminated the stage as they performed their routine.

After their performance was the senior dancers, with choreography based around the 2019 film “Us.” The dancers dressed in red with gold scissors to represent characters from the film.

“Now that we get to do it it’s a little stressful because you have to get everyone together, but in the end, the hard work is paid off,” said Sia Jagnatnarain. The routines were well-received hyping up the school and bringing the Halloween spirit altogether.

All in all, the many Halloween traditions of Frank Sinatra help it to stand out among the many schools of Queens. From decorations and costumes to performances and projects, the school comes together to pull off the spooky season of October.