What we Learned in High School 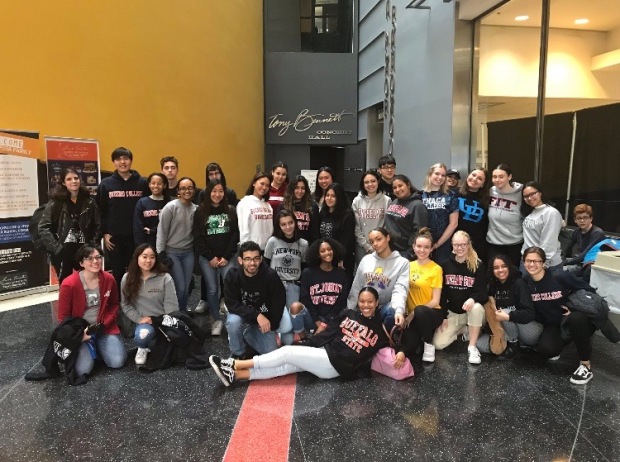 The environments we are in and the people we surround ourselves with contribute tremendously to who we are and who we will become.

Emotional, yet excited for the next chapter, Frank Sinatra School of the Arts (FSSA) seniors reflect on their experience as young adults throughout their four years in high school.  High school is viewed as a period in time where your adolescent years come to an end and ‘real life’ begins.

What these students have taken from this experience and how they will carry it with them for the rest of their lives speaks volumes to how crucial these years are in the development of a young adult.

High school leaves varying impressions on people, the students at FSSA feel as though they wouldn’t be the people they are today, if they attended a different high school.

Antonio Teoli, a senior film student, is just one of many students pursuing their craft in college as he will attend Brooklyn College, majoring in Film.

“If I hadn’t gone to an art high school, I probably wouldn’t have enough experience to continue majoring in film.  Sinatra really helped me further my passion for film and understand different aspects of it that I wasn’t educated on before,” says Antonio.

With all students taking at least three periods a day studying their major, many say that if it weren’t for this time, their career paths would be very different.

“If I didn’t go to this high school, I probably wouldn’t be doing art and have the same opportunities for internships,” states Ally Montana a senior Fine Arts major.

Along with FSSA staff supporting their students’ creative decisions, there is a sense of individuality amongst the students.  In order to really understand oneself as a human being and venture out on ones own, it is essential to become as independent as possible from a young age.

“Everyone is so different, but we all unite through our talent and the arts.  Along with that I learned to be more open and to not be scared to have a voice, Sinatra really opened my eyes in that sense,” adds Ally.

Being in different studios allows for students to be creative, using their emotion and personalities to create something near and dear to their hearts.  Whether it is through the captivating shots in their films, graceful movement in a dance number or an eye-catching painting. Every single one of these creations has meant something to these students and shares something about them that they couldn’t necessarily put into words.

These moments are the reason that many students at FSSA have been able to escape their comfort zone.  With everyone sharing their art, students have learned to accept themselves and their peers.

“The diversity in Sinatra is something special, I’ve encountered all different kinds of people and I’m grateful for that,” says Antonio.

Although there is great uniqueness to the experience at Sinatra, there are many common lessons that one is somewhat expected to learn in high school.

At a young age, children are taught to be extremely sensitive to everyone’s opinions and emotions.  As the child matures and has experience of their own, they realize that some battles aren’t worth the fight and not everyone will meet your expectations.

“My mentality has changed the most about me, it is important to understand how much effort you want to put into someone.  The most impactful message I have gained is to be able to let people go if they don’t reciprocate the friendship or love that you are emitting,” elaborates Antonio.

This lesson stems from the pressure that students at FSSA might initially feel when presenting their work, worrying about how everyone else will judge what they have done.  When asked about this transition from their first to last year in high school, seniors made it clear that through their art form they have become more comfortable in their own skin and realized it was about what they appreciated from what they made.

Overall, like any other high school student,  FSSA seniors have been presented with many positives and negatives. It is how these students have taken those lessons and implement them into their art form, understanding the importance of finding and accepting themselves, not needing anyone else’s validation.

It is safe to say that although they are looking forward to college, seniors will always view FSSA, not only as somewhere that they grew as an artist, but more importantly, as a person.

“I’m attending my college because of FSSA. When I stepped into Sinatra, I felt like I was at home and although my college isn’t exactly the same, I still had that ‘this is the one’ feeling.  Even though I am ready for a change and to take everything that I learned here, with me, I’m definitely going to miss it,” says Ally.