Are you Curious to See What’s Happening? 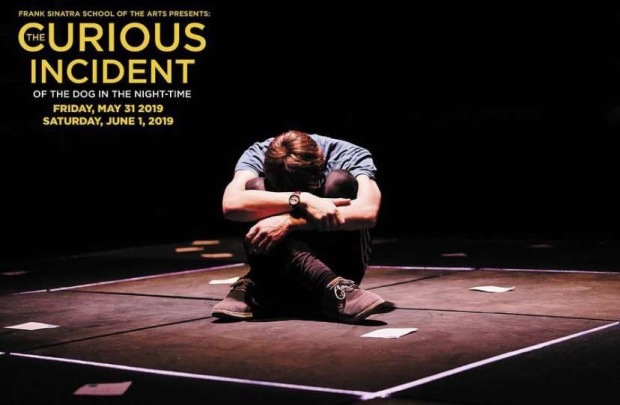 Excitement and anticipation are building at Frank Sinatra School of the Arts (FSSA) as it eagerly awaits the Drama Studio’s staging of The Curious Incident of a Dog in the Night-time, a play by Simon Stephens based on Mark Hadden’s popular novel. The story revolves around a boy with autism who is determined to solve the mystery surrounding the killing of his neighbor’s dog.

Frank Sinatra School of the Arts’ drama teacher and Director, Jamie Cacciola-Price (CP) has been wanting to put on this show, but felt that he did not have the right cast to fit the roles, until now. The production showcases intense and beautiful acting against a simple backdrop.

“It is a fun show to design. Having it set on a round stage, allowing the audience to view the story from different perspectives,” CP said.

Junior Drama Studio major Aidan J. Lawrence says the audience can expect some phenomenal performances from the ensemble. Taking on the lead role of Christopher, he feels that the audience, especially high school students, can relate to the multitude of social issues faced by his character.

“The role has been different than any other role I have played before,” says Lawrence. “It is different physically, mentally, and emotionally” demanding intense focus, being on stage for the two-hour duration of the show, and involving rigorous physical preparation and vocal warm ups.”

This play not only has the cast on edge, it also has the crew more stressed than ever. Senior film major Joseph Rana shares his experience with working behind the scenes. “This was my first time being production stage manager (PSN) for a show, so I’m in charge of calling cues, making sure other departments get their things done, and making sure CP’s vision comes alive on stage.”

As a PSN, Joseph has a lot of responsibilities, one of which is to make sure everyone is aware of what’s going on and for making sure everything runs smoothly. He gracefully leads his crew to deliver a smooth performance and helps the cast with whatever they may need. Even though Joseph does an excellent job, he still faces scares and obstacles.

“The show is so quick paced and there are going to be so many cues and light cues which scares me because I may call something incorrectly accidentally, but I know, with practice, I will get it perfectly for the show.”