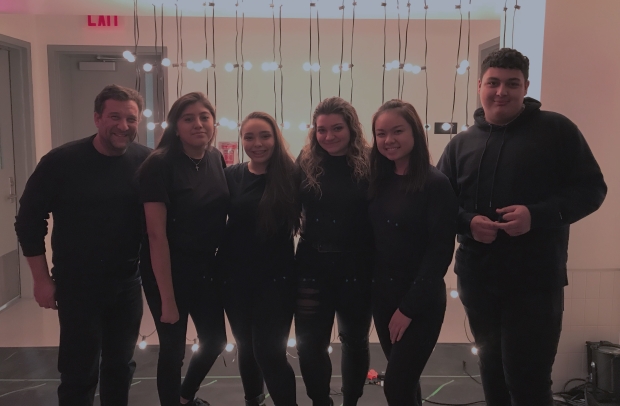 The author Natalie Martino, three in from the left, writes about how welcoming FSSA is.

We’ve all been there before. The first day of high school. The bell rings and you haven’t even found your locker yet. Panic sets in as you struggle for help, but your fears hold you back from asking for it. Students crowd the halls, engulfing you until it happens. A senior walks over to you and introduces themselves. Your fears and worries vanish within seconds as you are welcomed to the community.

Frank Sinatra School of the Arts (FSSA) has an environment like no other high school. Students mingle outside of their grade and major willingly, creating an impressive reputation. The upperclassmen shed a light on the tips and tricks of the school while underclassmen absorb new information and make friends.

Whether it’s through academics, extracurricular activities, performances, or rehearsals, students at FSSA collaborate regardless of their grade.

“When we have performances, for example dance shows, we are in rehearsal with everyone in that specific show no matter what grade they are, which is a great opportunity to make friends with people in the same major, but different grade,” said senior dance major Francesca Griffin.

The rehearsal and performance process at FSSA is crucial to uphold a level of professionalism, but more importantly allow for students to create a bond between all grades in their major.

Video Crew, another component of the rehearsal and performance process, creates more opportunities for students to mingle considering that crew is open to all grades and majors. Video Crew, managed by FSSA parent Lance Burns, is a team of students that dedicate their time to professionally record all events at FSSA for the school’s website.

“Video crew has been an opportunity for me to meet new people. My first day on the crew, a senior film major took me under her wing right away and taught me the ropes. We’ve created a strong friendship through working various shows together and I’m glad I joined video crew because I got to become friends with people I would have never thought I’d be friends with,” said junior film major Isabella Cataldo.

In addition to the performers and video crew, Stage Crew is another team of students from all majors. These students are a part of an elective class that teaches them how to professionally put on a show from managing to designing. Students often create the closest bonds throughout the year due to the amount of time spent after school and on weekends working on projects.

“I think because stagecraft is such a team effort it doesn’t matter what grade or major you’re from because you’re all there for one purpose. In my experience I found myself getting along well with students younger than me and from different majors. It was a great experience because I got to meet people I would not have met had it not been for stagecraft and being in an arts school there are so many opportunities to collaborate with people that have so much talent and potential. It allows you to network which I have learned is one of the most important things in college,” says FSSA film graduate of 2018 Gabriel Cavounis.

Alumni are often appreciative of the networking skills they acquired from their four years at FSSA as it carried over into college.

“Being in film and stagecraft enabled me to gain a lot of connections that followed me into college especially when it comes to stagecraft because crew is responsible for taking care of every art form for every show. Mixing grades prevents anyone having seniority and makes collaboration an essential part of learning and developing and I think more schools should incorporate this into their curriculum,” says FSSA film graduate of 2017 Jess Marrero.

Although there aren’t performances and rehearsals each day, there are other opportunities for students to collaborate such as classes within their major. Even when there isn’t a performance, students are still working outside their grade everyday in class allowing for peer guidance.

“My wind ensemble class is open to all grades, as I was a sophomore when I joined. I got closer to a lot of juniors and even seniors as we bonded through our art form. Now being a senior in wind ensemble, I get to see underclassmen coming into the band, mingling and looking up to seniors for guidance,” says instrumental senior Genesis Aldea.

From being on stage, to backstage, to the classroom, students at FSSA are guaranteed opportunities to mingle and create friendships outside of their grade and major. Students acquire skills of networking and collaborating, preparing them immensely for not only college, but life.