The Things That Happen Under the Stage 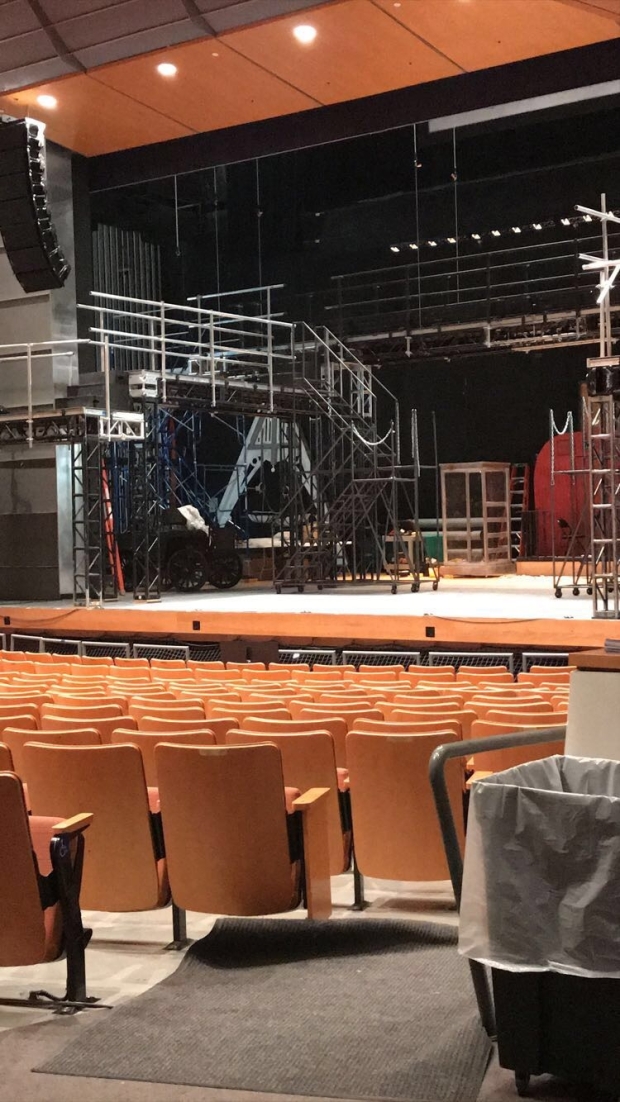 Frank Sinatra School of the Arts (FSSA) is notorious for putting on phenomenal shows for the school and the surrounding community. From music performances, to dance parties, and vocal cabarets, FSSA offers a wide variety of performances that appeal to the public. The most ambitious production of the year is the annual musical production in March, put together by FSSA’s Musical Theatre, Stage Crew, and Pit Orchestra. The audience always knows what to expect with what happens on the stage, but what about what happens under the stage?

Many students wonder what happens behind the scenes. They inquire about what the cast members do and what they think of the show. Sure, the cast members do perform the majority of the show, some may argue that they are the show. However, there is so much more when it comes to putting together a masterpiece of a musical. Students in the pit orchestra have their own perspective on what they contribute to the show. Sophomore french horn player Itayetzy Uranga (Itzy) shares her initial thoughts about joining the pit and her knowledge of the pit itself.

“The twins (Allycia Ferreira and Thamara Ferreira) told me they needed an extra horn player, at first I hesitated, but then I decided to join,” Itzy said. “I was kinda nervous because I didn’t know what to expect. The ensemble was kinda small and I didn’t know much of the musical.”

Itzy has never been exposed to a pit orchestra or anything relating to music theatre. When FSSA performed the musical Ragtime last year, Itzy proclaims “I couldn’t go see it because my parents didn’t let me,” and admits, “I really didn’t know much about it. I knew that the horn parts were crazy high and that the schedule for rehearsal was confusing.”

On the contrary, another member of the pit orchestra has a different approach. Senior percussionist, Matthew Reisacher elaborates the opposite view of pit. Matt admits that he was too familiar with pit because of all the school performances he has attended.

“My first musical at Sinatra was actually Rent and that was before I went into the school, so I had no idea there was an actual pit band, I just figured that the actors worked off the music out of the speakers,” Matt said. “I’ve actually attended Rent, Aida, The Music Man, and Ragtime. And every time, it goes beyond my expectations. The cast, the pit, and crew always put on a super professional show.”

Matt confirms his exposure to music theatre as he has attended multiple productions, but admits that he never thought a real life orchestra was playing the music under the stage.

When it comes to rehearsing music for the musical production, people seem to think the pit has the least amount of work to do. While this may be true to an extent, this doesn’t necessarily mean the work is easy. Pit Alumni Matthew Cuji, who graduated last year from FSSA, stresses the importance of every rehearsal for pit.

“Every day it was the usual routine. Come to class, be prepared, set up, and get straight to work. This is how we’d go about in each rehearsal. The problems would be the fact that some people might not show up to rehearsal when they need to or misplacing music or people talking during rehearsal,” Matthew said. “These things create a sort of delay in learning. Every minute we had was precious and every minute we wasted was a minute we could’ve used to perfect the music.”

Matthew isn’t the only one that explains the issues of rehearsing, fellow Alumni pit member Salvatore Di Leone (Sal), concurs. Sal has worked with the pit orchestra ever since the production of Aida, and has learned many things through his experience as the only percussionist that stood in the pit.

“No rehearsal is perfect. People are absent and key parts aren’t being played as a result, small auxiliary percussion instruments go missing, someone from jazz band changes our setup, people forget to bring their music, the list goes on,” Sal states. “These things don’t happen very often, but it hurts us all when they do. Luckily, the pit musicians tend to be among the most responsible in the school.”

The pit orchestra clearly deals with problems that they face ever so often. Coming from the pit members, the work is hard and takes responsibility to get past these issues. Not many people are aware of the hard work that the pit orchestra does similarly to the cast members. It’s great to hear the main part of the story with the cast, but it’s amazing to hear a better story from a group that no one ever sees.