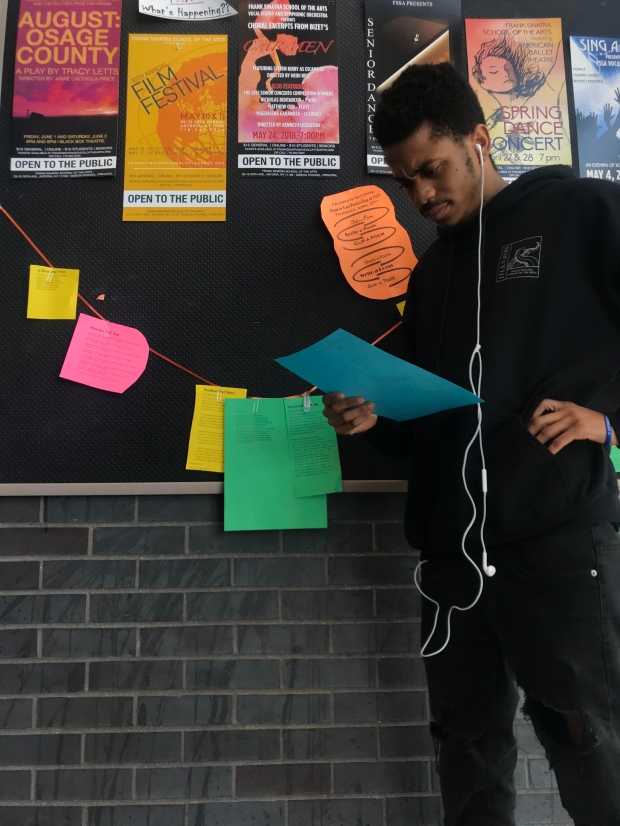 Poetry came alive at Frank Sinatra School of the Arts (FSSA) during National Poetry Month celebrations throughout the week of April 23rd, 2018. Students and teachers alike expressed themselves in a first of its kind Open Mic Ceremony and through a Poem in Your Pocket day event.

On Monday April 23rd, Frank Sinatra School of the Arts kicked off poetry week with its first year of an Open Mic Ceremony. Throughout the day in the school atrium, students and teachers
were able to share their own poems or of their favorite childhood poet.

“We tried to think of ways to incorporate the student body and the English Department thought that April was a great month since it’s National Poetry Month and it’s something everyone can do. Open Mic is a concept I think everyone enjoys because it involves a little bit of acting sometimes or breaking into song or being accompanied by a guitar. We just thought it would be a really wonderful venue,” says Assistant Principal and English teacher Ms. Apostolidis, who spearheaded this event.

Ms. Apostolidis continues to express her love for poetry when she tells us how poetry is a way people express their feelings. Many things are taken into consideration to emphasize your emotions and how to make people feel. When writing poetry, the five senses are used further as a technique.

As students and teachers sat in the atrium listening to the poems there was a sense of unity within the school. Everyone sat together and listened to the poems and emotions flew through both the reader and the speaker. There may have been different feelings that one took from the poem but that’s the beauty of poetry.

“Poetry is like a puzzle because there are so many different interpretations and it’s a wonderful way of expressing yourself and anybody can do it,” says Ms.Apostolidis.

The students who read their poems felt a surge of energy and attention from the listeners and their emotions were flying around like a hot air balloon. Isis Rodriguez, a Senior Vocal Major,
has begun writing poetry and was one of the students who shared her poem, “Pity Coffee.”

“My inspiration to start writing poetry came from my experiences in life. They gave me something to write about and I wanted to put them in my own words to express how the experience made me feel or what it taught me. While I was reading my poem I was a bit shy and my emotions went from steady and calm to sad because I would remember the experience the poem was reflecting,” she said.

The poetry celebrations continued on Thursday, April 26th with “Poem in Your Pocket.” Poems were collected in boxes placed in different areas of the building for students to share. A poem
was placed around the school for everyone to read and share.

The idea behind this was that poems would be clipped and students would take a poem and share it with their peers or you were able to clip new ones.

This opportunity gave the school community to really read different poems and decide which ones spoke to them the most and then be able to share it with someone.

Zayvia Carty, Senior Drama Major, found himself reading a poem he saw clipped on the bulletin board in the staircase. He was quite surprised in himself when he stopped to read a poem that
day and showed it to his friend.

“The thing about poetry is that it doesn’t matter what age you are. So many Shel Silverstein and Dr. Seuss poems were shared and it’s not silly at all. It reminds you of when you were a little kid
and whoever used to read it to you. There’s always a deeper meaning in a poem,” says Ms. Apostolidis.

By the end of the day on Thursday there were little to no poems left clipped around the school. Students were all walking around with little pieces of paper in their pocket with words of a
stranger that meant something to them in their own way and that really spoke to them.

“I really liked these two days of celebrating the idea of poetry and just how special it is to everyone. It’s special because of how diverse it is even though everyone is reading the same
words off the page and I think that really deserves to be celebrated and acknowledged,” says Eliana Panopoulos, Senior Vocal Major.