Cindy Yang: For the Love of Art 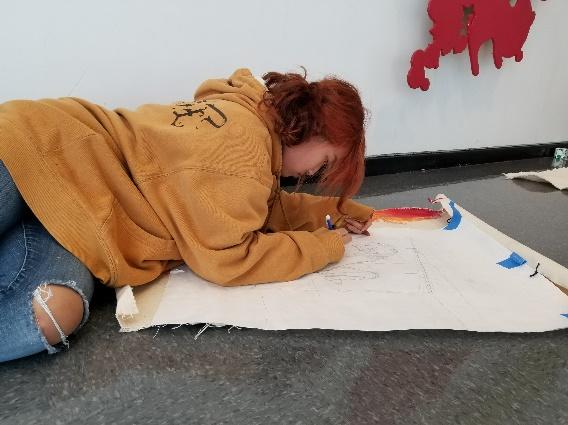 With her red fire hair, ripped jeans, an oversize sweater that has the word “nihilist” sprawled across the back lies an inspired young artist. She becomes thoughtful when asked about her inspiration for creating along with her opinion on different eras of art.

Cindy Yang, a 17-year-old art major at Frank Sinatra School of the Arts (FSSA) has always had a passion for art, but when she got older her mom suggested she try biology. She was set on becoming a scientist, but that changed when she entered her junior year of high school. Mr. Twarog, her illustration teacher encouraged her to pursue her love of art.

“In the 11th grade I was like, forget that, I want to be an artist because Mr. Twarog, he was this very put together person and I was like I want to be like that guy. So, he disciplined me to do illustrations and that’s when I realized ‘oh my art’s kind of different from other people.’.He would compliment me and I would be like ‘oh cool, I can do this,’” Cindy says.

She goes on to say that she tries not to think too much about what she creates, she just goes for it. She explains that viewing art all the time helps an individual develop a sensitive eye to details and that’s what really sets art pieces apart for her; appreciation of all the small details.

“You see you get that eye, when you look at art so often you have to start looking for the little details that you really like and then you expand on that,” Cindy adds.” Let’s say someone did a line very nicely, but the rest on the sketch was completely terrible. You still have that one line.”

Yang continues to talk about her inspirations, along with her old friend Agnes Palacio who was also an art major at Frank Sinatra. She describes Agnes as a character whose personality showed in her art and how that made Cindy realize the potential her own art could reach.

She also speaks on the importance of technique and creativity, the balance between the two that is needed to produce something worthwhile. She stresses that technique is something you can learn, while creativity is not. She admires the fact that this aspect can be found in modern art.

“If an artist has great ideas and they look at their art and it doesn’t appeal to them I think that usually that person would pursue techniques to improve their art because they’re already pretty creative,” Cindy continues. “Then you look at people who are good at technique only and you’re like ‘oh wow that’s good’ but, it’s just an apple. It’s impressive, but with creativity I feel like you can go a lot further.”

← Pursuing a Career in Dance
The Name Behind the Fame: Unorthodox →