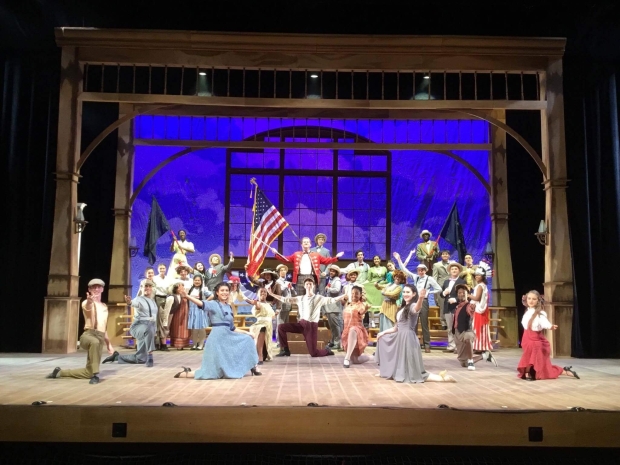 On January 30th, 2017 during a school assembly kicking off the spring semester the stage was filled with joyous screams from students, as their theatre teacher, Mr. Cacciola-Price announced to the whole cast, and to the entire school some exciting news: “They don’t know this yet, but they’re going to Broadway!”

The Schubert Festival is a theatre competition where high school students get the opportunity to be on Broadway for one night. Each year the festival grants 15-20 minutes for five schools to perform an excerpt of their plays and musicals. The purpose of this event, is for Broadway to celebrate, promote, and advocate for theater education to all students. And for the first time ever, Frank Sinatra School of the Arts was invited.

The adjudicators for this event watch full performances during the month of January in order to send their scores for the festival which will take place on March 13th, 2017. This was always a conflict for Frank Sinatra High School, because the Musical show dates are always only in the month of March. However due to the popularity of Frank Sinatra’s musicals, this year, things were different.

“We knew we had a very good chance at winning the competition, because the festival made an exception for our school to enter the competition and adjudication process,” Ms. Best, the vocal teacher for the Musical Theatre department stated.

She went on to say how although the show opening night is March 10th, she was confident that the entire cast was ready for a full show run though in January, the only things missing were a couple of props on the set.

Ms. Best and Mr. Cacciola-Price were both very confident with the cast of Music Man, so when Mr. Cacciola-Price received the news about the festival at a Drama Workshop the previous day, although exciting, it was no surprise. The teachers both agreed that the following day during the assembly, would be the best time to present the news to the cast.

When students entered school that morning they had no idea what news they would hear a short time later.

“It wasn’t even on our minds at that point we were all pretty much focusing on getting the assembly done,” said Gabriela Espaillat, who plays Gracie in the musical.  “We are all extremely anxious and excited when ever someone brings it up it lightens up the entire cast.”

It may be exciting now, however it will be even harder for the cast to say their goodbyes once the show is over.

“Honestly, I will be so sad when it’s over because it’s my last show and I won’t be here next year, but I’m so grateful for all the opportunities Ms. Best and Mr.Cacciola-Price have given throughout the two years I’ve been in musical theatre,” stated Courtney Long who is playing Mrs. Shinn in the musical.

However, there is no time for weeping just yet, the Broadway performance is just around the corner, and might be frightening to others due to the proximity of the festival and the school’s night performances of Music Man.

Ms. Best knows that the students are ready for the quantity of shows they have to perform, however she does fear the students may get behind with their school work, or may get sick due to exhaustion. Cast members on the other hand, feel confident, and know what to expect ahead of them. Gabriela Espaillat in fact, believes that the festival is motivating the cast to do even better with each show.

“Because of this, I couldn’t have asked for a better senior year honestly,” she adds.

March 13th will be a very exciting day for not only Ms. Best, Mr. Cacciola Price, and the cast, but also for all of Frank Sinatra High School. For the first time, one of this high school’s musical will be presented on Broadway.