Responding to the Inauguration Through Post-Its 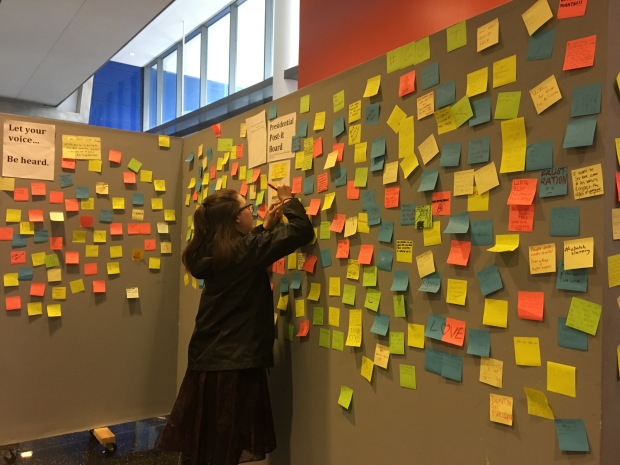 Students posted their opinions on the post-it wall.

In the open minded and socially accepting walls of Frank Sinatra School of the Arts (FSSA), students expressed themselves over now current president Donald J. Trump and found comfort the day before the inauguration by placing handwritten, anonymous sticky notes in the atrium. Concerns and words of encouragement could be seen on the wall as the number of sticky notes continued to grow over the three days it was on display.

Inspired by NYC’s Union Square subway station’s “Subway Therapy,” this wall was a place where students could vent, encourage, and even express excitement towards the new presidency.

“I mourn the loss of decency and respect for all,” read one sticky note. “Stronger together,” read another.

The school atrium is known for its beautiful architecture and for being home to art created by FSSA art majors. Since students were creating art as they wrote and posted a sticky note on the wall, it was only fit to place this experiment in the atrium.

“It was a perfect place to get people talking about the election again since it brings up different issues for different people,” said Mr. Scheiner, sticky note organizer and FSSA journalism teacher. Although FSSA is full of students with varying opinions, one thing all students have in common is, creativity. As students wrote their opinions, they also created art.

“What made the wall so different from other art projects displayed in the atrium is that this one is interactive and forever changing,” said Caitlin Brozen, senior instrumental major. It gave students the opportunity to not only voice their opinions, but, to also take part in another art form.

“It’s nice to look at the paintings by students, but it’s even nicer to get to participate in a project not being an art major,” added Brozen. “It is important to note that this brought the student body closer by showing them that their opinions are valued and respected,” she added.

Messages on the wall reflected all student opinions.

In an open environment such as FSSA, students should feel comfortable about voicing their opinions. Sophia Kazee a senior vocal major, said that it was important that students had the opportunity to post anonymously because they won’t feel judged about what they say. After all, there are more than 800 students at Frank Sinatra, so it is highly unlikely for everyone to have the same opinion.

This year’s presidential election has been one of the most followed and protested elections in history. The sticky note wall served as an outlet to talk about this important new political era.

“It’s important to talk about politics and what is going on in our country. I think something like this prompts those conversations between students and friends who might have not been talking about it,” said Sophia.

During the three day period where students had the opportunity to anonymously write their thoughts, it brought students together and sparked conversations between students, teachers and school staff members.

“I believe it brought students together despite the fact many people didn’t want Trump to win, we’re all sticking together and remaining optimistic,” said Chrysa Karaolis a senior film major.

During the three days it was on display, it was not uncommon to find students talking about what the next four years hold for the country. Students could also be heard and seen on the wall giving words of encouragement and expressing their feelings in art. After such a positive response, this is not the last time sticky notes will be used therapeutically or to create art.
— by Giselle Flores ‘17