The author’s father on set with one of his Model Ts.

People often say It’s not where you start, it’s where you finish that counts, but what amount of truth does that statement really hold? We all begin at the starting line and then we take off. Where we finish depends a lot upon our training, or so people used to think. In this day and age it’s not uncommon to see someone graduate college with a degree and pursue a career in a totally unrelated field.

Paul Brozen, my father, is a prime example of this.

A recent study from the Federal Reserve Bank of New York showed that a vast majority of U.S college graduates, work in jobs that aren’t strictly related to their degrees. The authors of the study estimate that just 27 percent of college grads had a job that was closely related to their major. What does this mean? Is college really even necessary?

When reminiscing about my father’s career path I could only think about Frank Sinatra’s voice singing the “That’s Life” lyrics:

I’ve been up and down and over and out…”

Since graduating from American University in May of 1978 with a Bachelor of Science degree in Criminal Justice, Paul has only used that knowledge when he portrayed a juror on CBS’s “The Good Wife.”

Upon graduation, he worked at Allied Stores Marketing Corp. as an assistant buyer in the home goods department. Curtains and bedding were not his avocation. Next, he tried his hand at managing an Athlete’s Foot, a franchise footwear concern. This literally came to an end when he found himself on the wrong side of a “Saturday Night Special.”

After this event, he decided to try social photography and eventually started his own video production company in 1982 with his childhood friend, Jim O’Grady.  Together they covered weddings, bar/bat mitzvahs, first communions, anniversary celebrations from Borough Park to the Hotel Pierre and everywhere in-between. As digital formats became very consumer friendly, photography was no longer a stable living. However, a chance encounter in 2008, using the 1967 family Chevy Impala on “Life from Mars,” led him to his present career: renting vintage cars to various film, print and television projects. 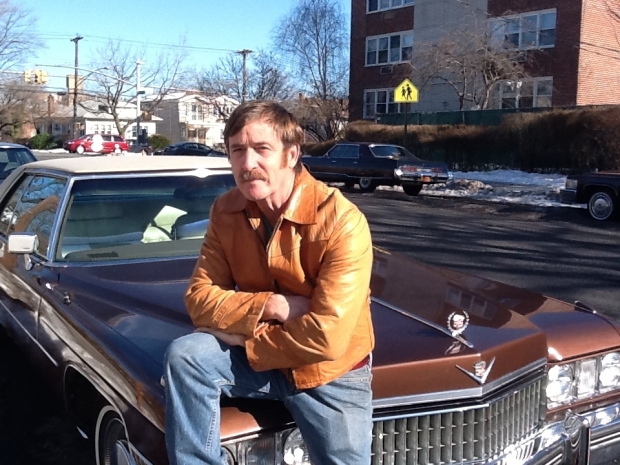 Mr. Brozen posing next to a Cadillac.

This non-affiliated degree path enabled Paul to travel the world and interact with celebrities. One day on the set of the feature film “Ice Man,” A-List actor Michael Shannon turned to him and said: “I believe we have worked together before.”

Just a year prior he taught Mr. Shannon how to drive a Model-T on the set of HBO’s “Boardwalk Empire.” Another experience sent Paul to Germany to purchase and import a Mercedes van that was made expressly for the European market. In the future he hopes to produce a documentary about “The Picture Car Guy,” which would depict what it’s like to find and secure cars/get them ready for their big debut and deal with demanding prop masters and casting agents.

As of this writing, his fleet is comprised of 36 cars. The first car, a 1967 2-door Chevy Impala, was purchased 20 years ago as a “Sunday car” driven very occasionally and kept in a temperature controlled garage. The collection now includes  a 1918 Studebaker; several T’s from the ’20s and various coupes;  a 1962 red convertible (as seen in “Jersey Boy” promos); a Scooby-Doo van and trucks  representative of the ’60s through the ’80s.

His wife, Ellen, of 30 years never knows what car she will see in the driveway next. His children are intrigued and participate in this developing venture. Liam, his middle child, earned his SAG (Screen Actors Guild) membership by working the past two summers as a car wrangler and precision driver on set.  Every once in a while Paul may be recognized in a film or a network production, but his biggest joy is actually seeing his vehicles’ in motion on the big screen.

While a Criminal Justice degree didn’t play a part in Mr. Brozen’s unorthodox career path, his college education did expand his horizons and help him become independent of his parents. Furthermore, it helped him transition from a dependent to a self-sufficient, including maintaining a household, becoming financially responsible and planning/saving for the future.

Mr. Brozen thinks taking some basic college business courses is advisable, but his college experience did help him refine his goals and pursue a successful career path.

To all confused teenagers out there and even to adults not sure of where they stand, Paul offers this final piece of advice: “Find something you like doing, then it never seems like work. Do something you’re passionate about because it’s not about the money,” he said.

While we aim to not finish where we start or take a road less traveled, all that matters is the journey. Paraphrasing from the lyrics old blue eyes sang in “That’s Life”:

“Each time you find yourself  flat on your face, pick yourself up and get back in the race”

← The ‘Bizzy’ City
A Young Start for the Drama Department →