On October 20, 2016 Richard Hoehler a writer, actor, and teacher visited Frank Sinatra School of the Arts’ library on behalf of the Penguin Random House Publishing Creative Writing Contest. This contest gives students all over New York City the chance to submit their work for recognition and awards cash prizes to the winners.

On the day of the visit, students dragged their feet into the library, exhausted from their many daily responsibilities. Assistant Principal of Instruction, Ms. Apostolidis, stood at the front and directed them to sit. As Ms. Apostolidis introduced Richard and the reason for his visit, students seemed to have the same idea in mind: This would just be a normal, lecture-type presentation. However, the second Richard spoke it was clear that this would be different. 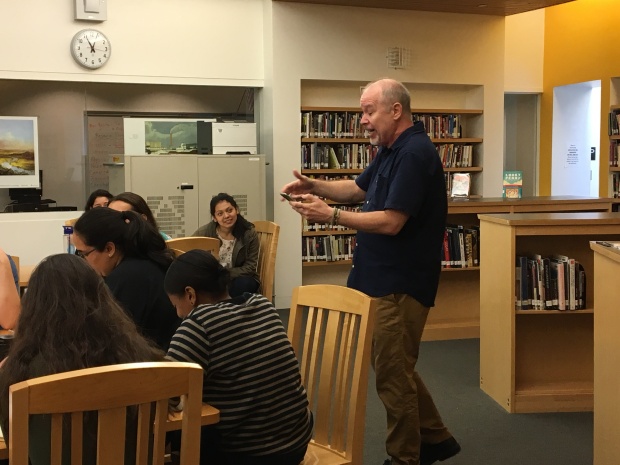 Richard has been visiting high schools across New York City for the Penguin Random House Publishing Creative Writing Contest for 22 years. He visits about 50-70 schools per year, from all parts of the city. Not only does he do this, but he also conducts workshops for teachers and adults.

Throughout his years, he has realized that he enjoys working with students more than adults.

“With kids, I mean, they’re just so open and ready to go all the time. That’s what I love. I love the energy young people have,” he said. He finds writing to be something that helps people develop who they are, and thinks it is really important to do so.

Richard started his presentation by emphasizing how important it is to express oneself. He said it is okay to be selfish with your writing, and it is important to express yourself for you, and only you, not to do it for anyone else.

He read a poem he wrote titled “How Now?” to the class about his personal feelings concerning the struggles of life. The second he began to read, the students were intrigued. His voice was strong and passionate, causing a different emotion on every student’s face, giving them bits of inspiration. This poem was meant to stir up feelings in the students, and to prepare them for the next part of the presentation.

He told them not to think too much about it and to give brief, quick answers. He tore down every rule students know about writing the date, your name, and even numbering the questions. He just asked them to write. This showed the idea of the competition. Penguin really wants to see students expressing themselves. They want to see students write for themselves, and not to necessarily please a crowd.

Richard brought his presentation to an end by asking the students to read their writing out loud. He explained how sometimes he needs to read his writing to someone to know what to change. He doesn’t ask for advice, or an answer. He just wants them to listen.

“I need to read it to somebody so I can really hear it. It’s like the volume gets cranked up,” he said. Richard said when you work like this it stays personal and purely reflects your own emotions.

Few students raised their hand to share, but once given the incentive of receiving a free book in return for reading out loud, hands shot up in the air.

Cassandra Quintero, a senior Fine Arts student, was one of the people to share.

She said she felt comfortable speaking and Richard’s presentation and advice helped her to not worry about what others would think.

Inaki Herrera, a senior Instrumental student, felt differently about presenting. He said he was nervous to present in front of the teachers especially, but the incentive of receiving a book and the things that Richard said to the students pushed him to get out of his comfort zone.

“Richard made all the students realize that deep within everyone is a writer, and every person has the right to express themselves,” Inaki said.

The presentation helped students feel free to express themselves through their writing. He brought attention to the contest, and almost every student left with an application in their hands, thinking about what they would submit.

← It’s time for you to vote for President: Click here to cast your ballot
Donald J. Trump →