There is Only One Tony 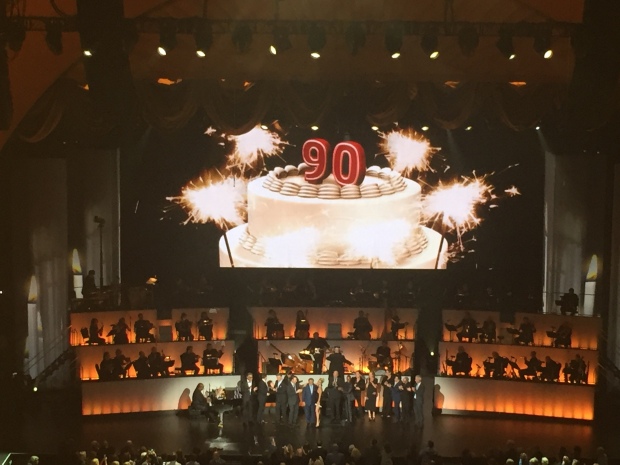 At the taping of Tony’s 90th birthday celebration

If Lady Gaga, Michael Buble, Andrea Bocelli, and many other all-stars attended your 90th birthday celebration, then your name must be Tony Bennett. On Thursday September 15th, Tony Bennett was able to celebrate his 90th birthday at the Radio City Music Hall with his closest friends and his wife, Susan.  Those lucky enough to snag a ticket were able to see legends such as Stevie Wonder take the stage and Tony Bennett himself.

Since the show was being taped for an air date in December, the audience was treated to a bird’s eye view of how the stage hands quickly and accurately reset the stage for musical performances and the comedy sketches so aptly performed by Alec Baldwin. Mr. Baldwin opened the show with a spot on impersonation of Mr. Bennett and did a Johnny “Carsonesque” type interview with Liza w a “Z” played by Mario Cutrone of Sex and the City fame.

The entire show was accompanied by a full band on stage for every artist to perform with.  The ambience that was presented with the traditional stage setting made the show heartwarming and nostalgic.  The audience watched with awe and wonderment as each artist took the stage singing smooth jazz music that complemented Bennett’s personality and era.

The first performer to take the stage was Lady Gaga in her silver dress with her rendition of “That Lady is a Tramp.” She electrified the stage, exciting the audience for the line up to follow. As she exited the stage, she congratulated Bennett on his years of success and his birthday. Gaga later commented on how Bennett is her speed dial in dealing with her artistry and personal life. Whenever she stalled, Bennett has reminded her that she is a star. “Tony, you are my family,” the multi-grammy winner said.

Students present their tickets to the show.

Michael Buble, sang “The Good Life,” which was followed by Bruce Willis extolling Mr. Bennett’s dedication to arts education and founding schools which brought loud cheers from the 2nd mezzanine where a group of 50 + students from FSSA were sitting.

Winton Marsalis, extolled Mr. Bennet’s participation in the Civil Rights Movement accompanied by Stevie Wonder and photos of Harry Belafonte and the march in Selma. After the first two musical numbers, there was a an animation segment with Homer Simpson, based on Tony leaving his heart in San Francisco, followed by a skit with Steve Buscemi (Boardwalk Empire), Bruce Willis, and tennis pro, John McEnroe discussing who bought the real microphone Tony used when he left his heart in San Francisco.

Finally after two hours of waiting for the master himself, Mr. Bennett took to the stage with a skit with Mr. Baldwin impersonating Mr. Bennett. During the skit the amazing stagehands once again reset for a musical performance by Mr. Bennett. As is often said, they saved the best for last. Mr. Bennett sang several tunes including “ The Best is Yet to Come,” “How Do You Keep the Music Playing,” “I’ve Got Rhythm” and finally, “I Left My Heart in San Francisco.”  While Mr. Bennett may be 90 years old, his musical talent and genius show no signs of aging. It is evident that Mr. Bennett loves performing for the public and sharing his music with the world. He has masterfully bridged the gap appealing to the young, the middle-aged and the old alike.

The evening ended on a high note with all the stars singing Happy Birthday to Mr. Bennet followed by an impromptu rendition of Stevie Wonder’s ‘Signed, Sealed, Delivered I’m Yours,” which brought the entire audience to its feet. The audience stood and sang along with both happiness and sadness for the impending end for the show.

← 8 Days in Italy
It’s time for you to vote for President: Click here to cast your ballot →