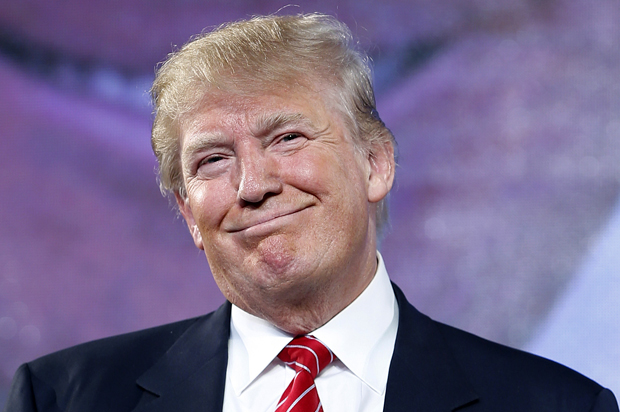 Republican presidential candidate Donald Trump speaks at FreedomFest, Saturday, July 11, 2015, in Las Vegas. Trump said his comments about immigration have become a movement and has pointed to violence perpetrated by immigrants in the U.S. illegally to defend his stance. (AP Photo/John Locher)

My name is Kendall Elliott, I am 15 years old, and I am currently a sophomore in high school. I never used to pay much attention to politics, it seemed boring and it did not concern me at the time.  However, that changed when you decided to run for president. I listened to your speeches, rallies, debates, and press conferences. You fascinated me and you brought out something in me that I never felt before. You brought out the pure despising hatred that I have never exhumed on a person until now. Your slogan for your campaign is “Make America Great Again.” However Mr. Trump, your conservative and ancient views on America definitely won’t make it great again. When you use the term “again” you are referring to an event or time in the past, and in this case you are referring to a time in American history.

So which time would you like to resurrect again Mr. Trump?

Would you like a time where people of color were seen as less than human compared to white people?

Would you like a time where white immigrants came to America and massacred innocent Indians, taking their land just because they could?

Would you like a time where women were seen as inferior to men and didn’t even have the right to vote?

Would you like a time where if a woman was attacked, held down, and raped on the street she couldn’t get the proper medical treatment that she rightfully deserves?

Would you like a time where people couldn’t love who they truly loved just because of their sexual orientation?

Based off of your slogan and your many claims of what you would do as president, you obviously want if not all, but most of these points in history to repeat themselves. However Mr. Trump, with you as President, America will not progress in the positive direction it has been for the past century. All these rights that many people in America have worked hard and even risked their lives to achieve would all have been for nothing with you as president.

To start this all off I have provided below your 19 point plan to “make America great again”, :

As grand as this list and the ideas on it are, they have many flaws within them. Using the terms “junk”, “rapist,” and telling China to “behave properly” to start it off are not mature political terms that should be used while presenting your plans for your future presidency.

Following those terms up with plans to not ride a bike or hire a secretary of state who rides a bike, shows no real plans to “make America great again.” As you read the other plans above, you can see no real economical plans that are going to benefit America. All of these plans are either impractical and unnecessary, or economically impossible.

You said “Building a wall is easy, and it can be done inexpensively.”

However Mr. Trump, according to a study by CNBC, to build the border wall around Mexico that you have been so excited to talk about, your wall would cost around $25 billion, and an additional $750 million a year to maintain the wall. I mean we are not all billionaires like you Mr. Trump, but to the other 99 percent of America, that is a very expensive job, and getting that money would result in higher taxes for the middle and lower classes. These plans do not seem like some that will make America great again.

To go along with the topic of immigration, you have made it very clear that you do not want Muslims entering the U.S. You said: “Donald J. Trump is calling for a total and complete shutdown of Muslims entering the United States, until our county’s representatives can figure out what the hell is going on.” This quote from you shows that you do not know “what the hell is going on” or else you would have listed it in your official statement and you would realize that you are subjecting an entire race and culture to the acts of just a small percentage of it.

According to White House press secretary Josh Earnest, your statement technically disqualifies you as a presidential candidate because when you become president you take an oath to serve and protect the people despite of race, religion, and ethnicity. Your plans would violate the oath therefore, you are technically already disqualified from being president.

Now, before I make this too long I am going to touch upon my last point that I personally find very offensive. Your treatment of women has been such an atrocity that myself and the rest of the 51% of America would suffer with you as president. Women have been fighting for their rights for decades. We are not objects, we are not inferior, we are people just as you are and we deserve the same exact treatment that you give other men. When you tweeted,”@realDonaldTrump: 26,000 unreported sexual assaults in the military-only 238 convictions. What did these geniuses expect when they put men and women together?” Oh, I don’t know. Maybe “these geniuses” expected men to respect the rights of women and to not rape them. However, in your mind, men are not capable of seeing women as anything other than sexual objects. In addition, you find life necessities that got you to where you are such as being excused to pump breast milk for a baby “disgusting.”

When a lawyer facing you in 2011 asked for a break to pump breast milk for her infant daughter, attorney Elizabeth Beck told CNN:“He got up, his face got red, he shook his finger at me and he screamed, ‘You’re disgusting, you’re disgusting,’ and he ran out of there.”

But wait there’s more, another tweet that you later deleted read, “@realDonaldTrump: If Hillary Clinton can’t satisfy her husband what makes her think she can satisfy America?”

According to you, Hillary Clinton’s sexual actions with her husband are a reflection on how she will run the country.  To you all women are sexual beings who are inferior to men. However, Mr. Trump women are just as equal to men. We work just as hard if not harder for our pay, which is a lot of time less than the pay of men. Therefore, until you start treating the majority of the population as equals to the rest, you are unfit to lead this country.

There are many other points I could have made that would prove that you are unfit to be president; however I want to close off with this strong opinion:

You are sexist, racist and a horrible judgment of the needs for others besides the 1 percent.

With you as president, this country will fall back into a time where races were separated, women were treated as inferiors, and the middle and lower classes will suffer from taxes that are too high. This country will become divided, riots will start, and people will turn against each other but especially against you. So unless you want the responsibility of dealing with a country full of riots, uprisings, and rebellions against you, then I suggest that you drop out. If you can’t handle answering a simple question that bothers you as you have shown in various interviews and debates, then how will you run a country where most of the population is questioning you on their basic human rights that you have taken away?

With you as president, America will not be great again.

Kendall Elliott a teenager concerned for her future.

← We Have the Diversity to Change
Barbie’s New Body →