Save Lives, Give Blood 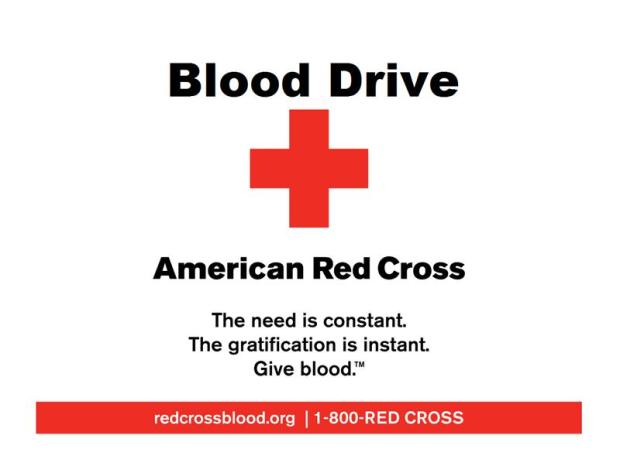 On March 4th, 2016 Frank Sinatra School of the Arts will be holding its second annual blood drive in the gym on behalf of the school’s Red Cross Club. Last year the Red Cross Club experimented with the drive and had a great turn out, with a goal of 45 people, essentially providing 35 units of blood which was given to The American Red Cross in the Greater New York region. Sadly, the club did not reach their goal of 45 people, however, they did receive donations from 43 people yielding roughly 33 units of blood.

This year Frank Sinatra’s Red Cross Club has a goal of 45 people, once again, but now they are even more determined to reach their goal of 45 donors at their Second Annual Blood Drive. The Red Cross Club’s President Juliana Durrant expressed her hopes for the upcoming blood drive.

“This year my goal is to get as many donors as we possibly can to come out and support, donate and spread the Americans Red Cross’ positive message. Our little sacrifice is going to save so many lives in the process and I hope this is something we will be able to contour doing in the future,” she said.

For some people, donating blood may seem like a scary thing, and Red Cross Volunteers and staff care. They’re aware students are likely to have some concerns and questions before students donate. These questions might include: Why Should I donate blood? How am I helping? How does this process work?

“I’m defiantly going to try this year last year I was unable to because I was anemic so in preparation I’ve been taking iron pills to raise my blood iron level for the last few months so I might be able to this year if all goes well,” Juliana explained.

Another dedicated club member, Franco Rojas, a Red Cross Club Representative says he is donating because he loves to help lives.

“Donating allows me to give back to the community. And just to think that me donating a pint of blood could potentially save three lives, that’s really why I’m donating,” he said.

Every two seconds someone in the United States needs blood. Although an estimated 38 percent of the U.S. population is eligible to donate blood at any time, less than 10 percent of that population takes action and donates at the least once a year.

The blood type which is frequently requested by hospitals is Type O. Type O negative blood can be transfused to patients of all blood types, it is always in great demand and often in short supply.

During the process a sterile needle is used once for every individual donor and then discarded. The process that you will go through at the blood drive will go as follows: firstly you register, then volunteers from the American Red Cross take a look into your medical history, a mini-physical is taken, you donate blood, and lastly you’re offered refreshments. The act of donating blood typically takes less than 12 minutes. Although, the entire process takes about an hour and 15 minutes (from the time you arrive, to the time you leave).

If you’ve ever thought about, or wanted to donate blood take this opportunity now. There’s a critical need for O+, O- and B- blood types. Your donation could potentially save someone’s life.

← FSSA On Valentine’s Day
We Have the Diversity to Change →