To Protect and Serve our Students

Agent Stokes says proper training and following procedures is the best way to handle a situation.

Students often feel as if school safety guards are against them and simply looking for a reason to bother them. There have been cases in which kids believe that guards are unfair or abuse their power. The recent case of the safety guard, Ben Fields, slamming the young female student at Spring Valley High School in Columbia, S.C. is a perfect example of why some students may feel threatened by school safety guards.

The officer who was called into the school was asked to remove a young female because she refused to leave the classroom after being asked by a teacher to leave. The young female student was caught using her phone and when asked to leave, stayed in her seat. The officer aggressively removed her from her seat, dragged, and threw her across the room. Videos of the event went viral within minutes and people across the nation, across the world, were outraged with the actions of the officer.

Ben Fields was removed from his position as a deputy and the head chief of the police confirmed that Mr. Fields indeed did not follow protocol. The officer was not trained for this type of situation.

Of course, a situation like this would strike a type of fear or feeling of being unsafe among high school students. Considering school guards are the people who are supposed to protect you within your school, after seeing this video schools may end up with students who resent them. Some students may feel as if the guards are their enemies who are out to get them.       ​

Tanya Stokes is one of the school safety guards who works at Frank Sinatra School of the Arts. Before working at Frank Sinatra, Stokes was assigned to The Bronx West Academy and was a fill-in agent meaning that she had to go to a different school in the Bronx daily, instead of having one definite school.​

“I decided to work for the NYPD safety division after 9/11 because I was stuck in Manhattan and I was terrified not knowing how I would get to my family. I decided to work in the borough in which I lived in and this city agency was hiring,” Ms. Stokes says. “The process is a lengthy one,” Ms. Stokes comments. “You are finger printed, investigated, trained, and then you graduate.”

Along with this procedure, the training to become a guard takes 16 weeks. Ms. Stokes states that on handling situations with students, school safety must adhere to its administrative and patrol procedures. She also explains that the division is required to attend ongoing training sessions.

​Upon her graduation she soon obtained the title of school safety 1st line supervisor. In order to achieve this Ms. Stokes had to pass an exam which consisted of things she should—and obviously did—know pertaining to her job such as penal and criminal law.

“School safety agents don’t apply force, we use tactics for students to comply,” Ms. Stokes said when asked if there has ever been a situation in which she had to apply force upon a student.

However, the boys in no way felt threatened by the guards or feel anger towards them. The boys are actually “cool” with the guards and have befriended them. Due to the guards not using incorrect strategies and following proper training, the boys were able to overlook the suspension and continue to feel safe by the guards and still befriend them.

“As a student in Frank Sinatra, the guards make me feel pretty safe, the only thing that they constantly say is ‘get out of the hallway’ or ‘clear the halls’, other than that nothing major happens I don’t think,” Tatiana Wittong, a junior, explains. She is yet another student who has befriended the guards and realizes they are here to protect, not to threaten.

Although many students do feel threatened by school safety guards, if the guards take correct procedures and follow protocol, students are more likely to feel safe in they’re high school. Even though the video of Ben Fields portrays a negative outlook on guards, the guards at Frank Sinatra make students feel safe. 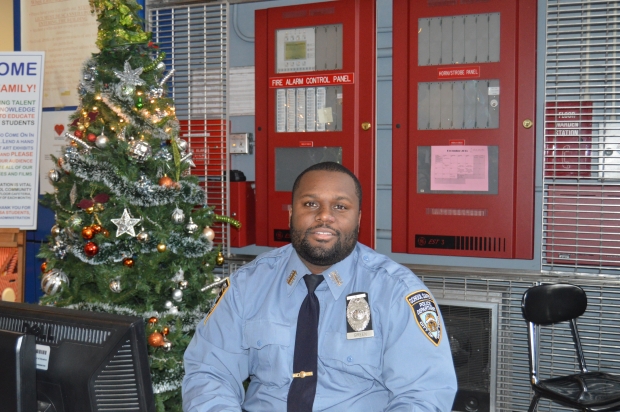 Agent Green is here to help not hurt.

“I thought the guy was totally wrong, I don’t know the protocol that’s used in the city that the incident took place in but school safety agents here would never react that way with a student,” Officer Green, another FSSA school safety guard, said, upon seeing the disturbing video of Ben Fields for the first time,

Officer Green said if a student refused to hand over a phone and resist to leave the classroom he would have had the dean come to the room and handle the situation according to school guidelines.

“School safety agents sometimes assist school staff in some situations but we don’t deal with cell phones or classroom management issues. School safety agents are assigned to NYC schools to protect students, staff and property, not assault kids for being on Instagram in class,” Officer Green said.