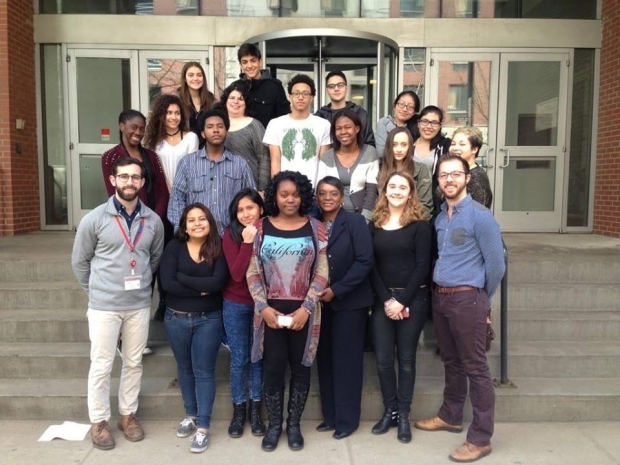 The Red Cross Club, founded by Juliana Durant, an FSSA senior drama major, has been a great success at Frank Sinatra School of the Arts. Durant adopted the club after administration asked her to take over two years ago. Durant automatically felt the need to take over, almost like it was her job. She had already loved the Red Cross Club so much that doing this job would bring her great enjoyment. Although Durant faced great stress figuring out how to make the club come alive, she finally hit lotto last year, as well as this year.

“Not only do you have to research how to run the club, but you also have to find a teacher who is willing to supervise the club after school,” Juliana stated.

Each individual in the club must not only remain extremely active all year, but they must also stay organized. “The club not only helps with your organization skills, but you’re also saving lives, as well as giving up your time to truly help others,” she said.

The Red Cross club meets on Monday-Wednesday as well as Thursdays, depending on the schedule. These meetings are held after school in room 435, as well as at the Red Cross headquarters in Manhattan.

FSSA’s Red Cross Club focuses on raising money for the American Red Cross Organization. Activities such as blood drives, bake sales, student versus faculty basketball games, and the upcoming talent show for this year raise money for those in need.

“When I first joined the club during my sophomore year there were 10 members. When I became president of the club there were 50 members in the club, and now there are 102 members. It’s crazy to believe that another 52 members have joined the club, and although the club provides necessary community service hours, many of the members enjoy it. I would say about 70 out of 102 do,” Juliana said.

What is the Red Cross All About?

The American Red Cross is also known as the American National Red Cross. It is a humanitarian organization that provides emergency assistance, disaster relief as well as education inside the United States. Founded by Clara Barton in 1881, the organization has made a great impact on not only the world, but its members as well. As mentioned previously, it takes time and responsibility to be in the club, even outside of Frank Sinatra.

Juliana has gained about 1,000 hours of community service hours as well as a deep love for helping others while in this club.

Kaylyn Sanchez, a senior drama major is also a member of the Red Cross Club member at the school. She joined during her junior year and is an active member of the club. Sanchez says the club keeps her occupied and responsible.

Kaylyn feels that the club’s activities such as the blood drives, bake sales and other extracurricular events such as the student faculty game, which took at the end of last year keep her wanting to come back for more.

“Although the meetings after school are almost every day of every week, I still put in my best effort to give if my all to Red Cross,” says Kaylyn with a smile. She works closely with many of the senior drama majors who run the club, making her feel even more at home.

Sylvia Gao, a senior art major also joined the club last year. Sylvia enjoys the fact that the club provides free community service hours, however she is fully invested in the club as well.

“Keeping up with all of the meetings may be a hassle at times,” she said, “But they aren’t that long and they’re right after ninth period.”

Sylvia has been doing this for over a year now, although many people have decided to join these year to gain hours.

“A lot more people have definitely joined this year. I would say about 50 to be exact. It’s definitely for community service hours because they’re easy to get in this club,” Sylvia said. She also made it a point that that is not only why she joined the club.

The Red Cross Club is a unique organization, run by students, and definitely stands out like no other. The incredible amount of time and effort put in by many of these students is incredible. It turns out that helping others really is noticed more than most people think.

← Click Here for The Names that Hurt Trailer
SUS Profile →