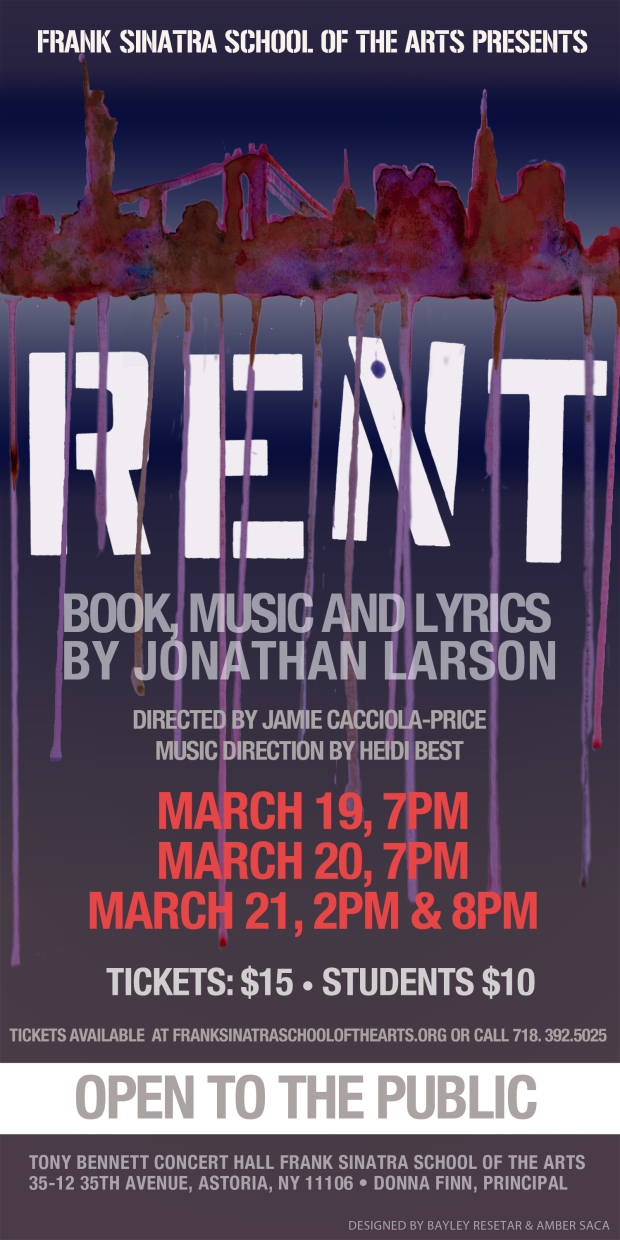 The Musical Theatre program at Frank Sinatra School of The Arts has long been known to perform hit shows such as “Carousel,” “Footloose” and  “Little Shop Of Horrors” each performed as though the students were straight off of Broadway. Nobody knew what they were going to roll out next until Mr. Cacciola-Price, at the final performance of last years production of “Little Shop of Horrors,” asked the audience to come back again next year because our school was planning on performing on one of the most monumental productions of the 21st century, Jonathan Larson’s “Rent.”

“Rent” is a “rock-pop score” that tells a story of struggling, young artists trying to create a life for themselves in New York City in the late ‘80s and early ‘90s. But besides being a pop phenomenon when it hit the scene in 1996, this musical has been teaching many educational lessons and the musical theatre program here at Sinatra is trying to showcase those issues just as well as the amazing talent of both casts.

“I think because this show is so New York City in a time that’s not so far in our past, roughly 20 some-odd years ago, those issues are still here although those issues might not be as prevalent because of time and people have become more comfortable with them,”  says Mr.Cacciola-Price, one of Frank Sinatra’s drama teachers and also one of the directors of ‘Rent.’ “But they still exist and I want to be able to address these hard to deal with issues in this environment because we can do it well. We can handle these issues with grace, we can educate this community in a way that i feel we’ve kind of missed out on in the past.Good theatre has the opportunity to create empathy within the community and to educate and this show will absolutely do that.”

The scripts for the musical were given out way before the 2014-2015 school year even started. Giving the cast plenty of time to truly envelope the roles they were given. The students are all ready to give everything they have in order to do the musical justice. Especially since Frank Sinatra is one of the only schools that was fortunate enough to get the rights to the original production of Jonathan Larson’s “Rent” and not the edited “Rent : High School Edition” which changes some of the raw language that makes the play more real and changes a number of song lyrics to be deemed more “appropriate.”

The production has many issues that it touches upon such as HIV/AIDS, poverty, and drug abuse. Hence why this musical is not always a high school’s first choice for a musical performed by students, but Mr. Cacciola-Price didn’t pick the show because of its content, he actually picked the show for the simple fact that there are only a few musicals that anyone can name off the top of their heads and “Rent” is always one of them. He hopes that this production of “Rent” will put the musical theatre program at Frank Sinatra on the map.

All the students cast in this show are really ecstatic and ready to work hard and put on an incredible performance. They work all year and every day for this, and passion is definitely a word used to describe these performers.

“Honestly, it’s a little nerve-wracking just because I want to do the best performance I possibly can, but I’m really excited, Angel is one of the roles that I’ve always wanted to play and the music in ‘Rent’ is so great so mostly [I’m feeling] excitement,” says Romello Rodriguez, Senior Drama major and Student Body President playing Angel.

Ricky White, a Senior Vocal major and playing Roger in this production of “Rent” said he feels excited and really honored to have been given this role since Rent is such a risque play.

“It’s not risque in the sense of ‘oh lets just talk about a lot of drugs, or let’s have strippers in the show,’ it’s risque in the sense that it teaches a lesson and it continues to teach lessons 10 to 20  years after it was originally written and I’m just excited to share the story with everybody in the school and share the morals and share the knowledge that Jonathan Larson, who wrote the play, kind of bestowed upon everybody when he wrote it,” he added.

Romello added that in rehearsals, all of the actors are excited and motivated.

“We are so committed to working on it and every time anyone sings or talks about the production value of the show or anything going into it, there’s so much hard work going into it and everyone’s so excited and it’s going to be a really amazing production,” he adds.

Also besides educating the Frank Sinatra community through the show itself, there are also some other events planned such as an event for AIDS and HIV Awareness in December with some special guest speakers lined up to talk about the history of the disease as well as where it is now. In addition there will be a very special preview from the cast of “Rent.”

“This is information that people don’t know and need to know because they think they won’t get it and they still can,” says Mr. Cacciola-Price